ņYouĒve been reading all day. Look at your fingertips. TheyĒre all sunburned from holding scripts over your face.Ņ - Turtle (Jerry Ferrara) 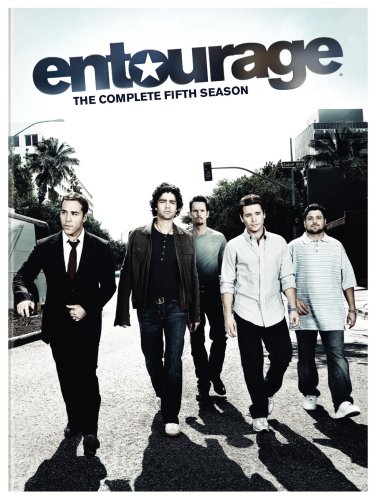 Vince and the boys are back for more. Sure the show's formulaic, but each and every episode is still tons of fun.

I really didnĒt think the HBO series Entourage had three seasons in it, let alone six (the sixth premieres in just over a week). Survive it has; hell the show has thrived, delivering some of the networkĒs best ratings on a consistent basis. IĒm not entirely sure where its appeal lies. ItĒs possibly the good looking guys that head up the cast, but I know more male fans of the show than female, and it could be the hilarious performance that Jeremy Piven delivers week-in and week-out. No, I think the real appeal lies in the fact that the basis of the story is a time-honored, rags-to-riches tale. Despite these guysĒ good looks and huge egos, itĒs difficult to find TV characters that are easier to root for.

ItĒs simply amazing how fresh each and every season of the show feels, even though the story arcs seem awfully formulaic at times. Thus, we get more of the same in HBOĒs new box set, Entourage: The Complete Fifth Season, but die-hard fans of the show (myself included) wouldnĒt have it any other way. The season premiere, Fantasy Island, naturally picks up where the fourth season ended, dealing with the fallout of MedellinĒs disastrous release. Vince (Adrian Grenier) and Turtle (Jerry Ferrara) are hiding out from the rest of the world on a tropical island, but a great opportunity drives Eric (Kevin Connolly) and Ari (Piven) to try and convince him to come back to Hollywood. We then get to Unlike a Virgin, where Vince is still feeling extremely insecure, and a run-in with a former flame definitely doesnĒt help matters.

WeĒre then on to the third episode, The All Out Fall Out, which covers a lot of ground, including Vince slumming it by working a Sweet 16 party, Ari going at it with Adam Davies (Jordan Belfi), and Drama struggling to cope with life after Jacqueline (Julia Levy-Boeken). The best part of Fire Sale is DramaĒs appearance on The View, where memories of Jacqueline bring about the utmost in humiliating breakdowns. Tree Trippers is the seasonĒs best episode, and much of that can be attributed to guest star Eric Roberts. Of course, seeing the guys, and especially Ari, high on mushrooms at Joshua Tree National Park is even more amazing. Dom (Domenick Lombardozzi) rears his ugly head again in ReDOMption, an episode that includes Ari making a high stakes golf course wager involving VinceĒs career.

The next two shows, Gotta Look Up to Get Down and First Class Jerk donĒt offer anything too interesting, but the latter includes TurtleĒs first encounter with Jamie-Lynn Sigler (The Sopranos), who plays herself. We move on to Pie, where VinceĒs new movie, Smoke Jumpers has begun filming. He has a run-in with co-star Jason Patric, which causes Drama and Turtle to seek revenge via a series of hilarious pranks. Seth Green Day features the title character returning to continue his rivalry with Eric. This time, it involves Sloan (Emmanuelle Chriqui), which only makes Eric more outraged. In the penultimate episode, PlayĒn With Fire, the tension on the set of Smoke Jumpers comes to a boil. After that mess on the set is finished, we get a sense of hope for VinceĒs career in the season finale, Return to Queens Blvd. IĒll leave it to you to discover how the season ends up, but I will say that it opens up a myriad of possibilities for the new sixth season. HBOĒs three-disc set is up to par with their previous collections for the show, with great audio and video, along with a few audio commentary tracks and cast and crew interviews.