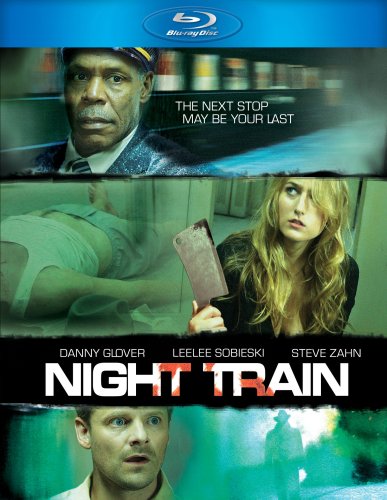 Despite the presence of Danny Glover and Steve Zahn in the cast, the real appeal here, for me, is Leelee Sobieski...and it's not for her acting talents.

WeĒll cut right to the chase and say that Night Train wears its low budget on its sleeve. WeĒre even given its shortcomings right from the get-go, with one of the worst opening credit sequences youĒll ever see. Despite the initial bad taste left in my mouth, I persevered and leapt into the film with an open mind. Good thing I did because things actually turned out better than expected, and the film is a relatively engaging experience, albeit one that requires you to severely suspend your disbelief. Hitchcockian to say the least, Night Train is one of those flicks to throw on late one Friday night and just chill out to.

The premise is a relatively simple one, as weĒre taken aboard a passenger train called The Nightingale on Christmas Eve. We meet three key players: the trainĒs conductor, Miles (Danny Glover), and two passengers, one a drunken businessman named Peter Dobbs (Steve Zahn) and a lovely young med student, Chloe White (Leelee Sobieski). What seems like a normal train ride takes a turn when a strange man boards the train with a package in tow. Soon, something tragic happens to the man and our main trio is left to discover the packageĒs contents; a wooden puzzle box that practically demands that they look inside. The box soon takes a sort of control over them and they will stop at nothing to ensure that the box remains intact, and, most importantly, belongs to them at the end of the train ride.

ItĒs difficult to actually recommend something like this, but thereĒs enough here to make it a guilty pleasure. I donĒt know that IĒll ever watch the film again, but the initial ride left me feeling pretty good about the 90 minutes of my time that I had just spent. LetĒs get back to the amazingly cheap-looking special effects. ItĒs painfully obvious during each and every exterior sequence, that weĒre seeing actors shot against Green Screen. Sure, that kind of thing is done in seemingly every movie these days, but the quality of the resulting special effects is, at worst, eye-catching. Here, they are bargain-basement, almost always involving exterior shots of a zooming train. ItĒs difficult to even make out the details of the train itself, as the nighttime backdrop is way too dark. Plus, the numerous plot holes are, appropriately enough, the size of train tunnels, and the twists and turns are extremely predictable. One particular twist, involving the true identity of a passenger with a dog, could have been figured out by my five-year-old the first moment this character appeared. Still, the ending is surprisingly engaging and ambiguous enough to cause at least a short post-viewing discussion.

The main cast is what it is: a collection of B-Listers doing their best with a weak script and horrible effects work. While Glover is in full, middle-aged Roger Murtaugh mode, and Zahn is playing his typical nerdy fish-out-of-water character, itĒs Sobieski that struggles the most to remain believable. Her career is a very interesting one. She hit the scene in the disaster movie Deep Impact, standing out among a cast that was basically there to drive the special effects, did a great job with limited screen time in Eyes Wide Shut, and led the cast of the widely released thriller The Glass House. It was all downhill from there though, as itĒs been nothing but horrible films like The Wicker Man and 88 Minutes, or direct-to-video flicks. Her work in Night Train makes it painfully obvious as to why her career has never really taken off, as her amazing beauty canĒt totally hide her consistently wooden acting approach. Still, IĒm sure IĒll continue to seek out anything and everything Ms. Sobieski does in the future.