DVD Review: FOR ALL MANKIND (BLU-RAY)

"When you're out there in this little command module, you see the risk you're taking because you realize that, if the glass breaks or the computers quit workin' or the electrical system quites workin', you're not gonna get back. And you have time to contemplate this. You have time to think about it. And you have time to run it through your mind alot of different times." - Alan Bean 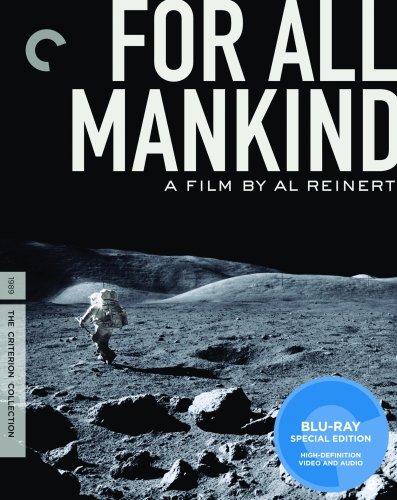 Just in time for the 40th anniversary of the first moon landing, Criterion brings the lunar experience to us via Blu-ray.

The nine voyages of the Apollo mission to the moon took 24 men (three went twice) on the most incredible adventure of modern times. While the explorers of yore went without communications or often without really knowing where they were heading, they also weren't heading out a quarter of a million miles, sitting on top of megatons of high explosives, in a fragile crate that, if punctured, would result in instant death. Writer/director Al Reinert spent years scouring through the NASA archives for footage that was spectacular, but that hadn't really been seen widely. The resulting collage helps us try to experience what the trip was like, with the voiceovers of many of the Apollo astronauts themselves about what they felt and saw.

Purist space geeks have a lot of criticisms of Reinert's work here, since he combines all the missions into a single trip, and blurs a lot of the different voyages together. For those in the know, it's a little disconcerting to see one astronaut onscreen while another (often from a different mission) is talking about it. But as Reinert discusses in the extras, he considers the nine voyages to the moon as a single mission (not unlike how history rather combines Columbus' four voyages into one). The blurring is intentional, for neither the onscreen people nor the voiceovers are ever identified. Reinert's audience is really the uninitiated, who although they may come away with an erroneous impression of how the voyages worked, will nevertheless certainly also come away with a heightened sense of the awesome achievement and moreover the unimaginable beauty of the trips.

That's really Reinert's central focus: to emphasize the awe and beauty. He's not interested in producing a documentary that says, "And then Apollo 12 launched on November 14, 1969." The experience of the voyage is what's important to him, rather than the science and technology. The astronauts themselves acknowledge that although the tech was what was central during the preparation and for the missions, they had to take a moment to be human and enjoy the moment, taking in exactly where they were and what they were doing, which is pleasant considering they were virtually all military men. One thing that they are united in mentioning is the perspective of the Earth vanishing behind them as they headed to the moon, and the fragility of the little blue marble carrying several billion people, surrounded and protected only by the thinnest layer of atmosphere.

Another common theme, though not quite as universal, is the spiritual impact that the voyage had upon the astronauts. That expresses itself in very different ways, however: Jim Irwin becomes more deeply committed to his evangelical Christianity, while Edgar Mitchell turns to psychic phenomena, and Alan Bean becomes the painter who tries to convey the sensations of being on the moon through art. The downside of having made the voyage and the post-travel depression that was common among the astronauts is relegated to the bonus materials, with the main feature emphasizing the positive and the gorgeous imagery.

Reinert's Oscar-nominated documentary is certainly successful in providing imagery that was long unavailable; it, as well as Reinert's work co-scripting Apollo 13 helped bring about a revived interest in the Apollo program and space exploration generally. Whatever objections are raised to the presentation (such as the inclusion of a little Gemini footage just for its spectacular quality), it's undeniably beautiful and moving, and the sense of joy watching the astronauts bound about the moon, taking a few moments off-script, is palpable. It makes one long to share in the experience.

The Blu-ray HD picture is a bit wasted on this material, since much of it was shot with grainy 16mm cameras under exceedingly difficult conditions, and the first steps of Neil Armstrong on the moon are in lamentably bad video condition. Rumors still swirl about the existence of higher quality video from the Australian receiving areas, but to date that videotape sadly all seems to have been reused. The DTS MA HD stereo gives an enveloping quality to Brian Eno's atmospheric synthesizers. The voiceovers are clear, though some of the mission audio begs for subtitles. Two versions of subs are present, one identifying the people onscreen, and another with SDH track that identifies both the onscreen personages and the speakers.

There are a number of valuable extras, all presented in HD. Reinert and "Last Man on the Moon" Gene Cernan offer a commentary that's not entirely screen-specific, but they have a lot of additional information not covered elsewhere. An Accidental Gift (23m:00s) is a making-of documentary that includes rare glimpses into the NASA archives where the original mission film is kept in deep freeze, only rarely to be thawed out. Reinert's dogged pursuit of scenes not usually shown gets plenty of coverage, as well as discussion of why he chose to present the missions as a single voyage. On Camera (20m:35s) is a collection of interview segments with fifteen of the Apollo astronauts (Neil Armstrong is captured speaking at some kind of panel discussion, since he apparently refused to cooperate with Reinert). One of the more fascinating segments is one devoted to Alan Bean's artwork; he offers a 7m:33s introduction to how he ended up doing space art, and his techniques and texturing, followed by a 36m:18s commentary on two dozen of his most notable paintings. A new book of Bean's art, Painting Apollo is being released at about the same time as this disc, and it's well worth checking out for those interested in the subject matter. Less interesting are an assemblage of audio clips from Alan Shepard's 15-minute flight to Gene Cernan bidding farewell to the moon at the end of the Apollo 17 mission (6m:45s), and a short accumulation of liftoff footage from the Mercury Redstone through the Saturn V (2m:34s).