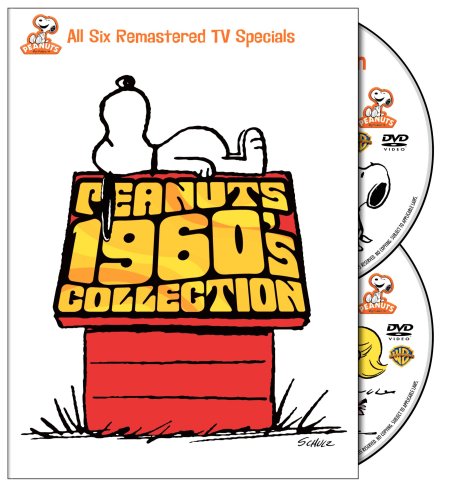 The umpteenth repackaging of the popular Peanuts TV specials includes a few that are new to DVD and a great documentary on composer Vince Guaraldi.

Would Charles M. Schulz' Peanuts characters be as beloved today if they'd never been marketed to death? Met Life, calendars, T-shirts, plush toys, and, of course, several dozen TV specials have cemented the characters in the public consciousness the way a simple comic strip never could. They've certainly proven to be mainstays on DVD; the next re-release of the most popular specials has become a semi-annual event.

This set collects six specials released between 1965 and 1969, setting the stage and establishing the tropesˇwah-wah trumpet-voiced teachers, absent parents, endless self-reflectionˇthat would carry on for the next 30 years.

Four of them have been on DVD before: A Charlie Brown Christmas, the first and quite possibly the best, most beloved item in the Peanuts canon, leads the set, followed by the baseball themed Charlie Brown's All-Stars (previously released alongside Lucy Must Be Traded, Charlie Brown), which sees Chuck grappling with the struggle between team spirit and corporate sponsorship (Irony alert! Get Met! It pays!) when his ragtag team is offered new uniforms if they'll dump the bad players (and, uh, the dog and the bird).

It's the Great Pumpkin, Charlie Brown sees the kids struggling with belief in an absent savior and the perils of poorly thought-out costumes, while You're in Love, Charlie Brown (previously released with the remastered edition of Be My Valentine, Charlie Brown) offers another sad chapter in the romantic life of the titular sad sack.

Two specials are new to DVD; one's a classic, and the other a lesser-known gem. He's Your Dog, Charlie Brown is for the Snoopy-loversˇa bit of misbehaving lands him in obedience school, but on the way he seeks refuge with Peppermint Patty, and discovers that there is a fate worse than being taught to heel. A lot of this one might remind you of Snoopy, Come Home, just as the other new release, It Was a Short Summer, Charlie Brown recalls the feature-length Race for Your Life, Charlie Brown (still MIA on DVD)ˇthe crew heads to summer camp, where a rivalry breaks out between the boys and girls and everything comes down to a wrestling match between Lucy and the "Masked Marvel," who has paws and floppy ears and a tail. I'll say no more, lest I ruin the surprise.

The DVD: Video and audio quality are generally pretty good. All the specials have been remastered and exhibit fairly clean transfers and clear soundtracks. This is a bare-bones presentation for the most part, but then, we've never really seen much in the way of extras for the classic Peanuts releases. The big bonus this time is a new 36-minute documentary focusing on Vince Guaraldi, the jazz maestro whose noodling piano scores have become synonymous with Charlie Brown and Snoopy.

The back of the box has a little misprintˇthe double-disc set collects three episodes on each disc, but the packaging says Disc 1 has four.