DVD Review: 2 OR 3 THINGS I KNOW ABOUT HER 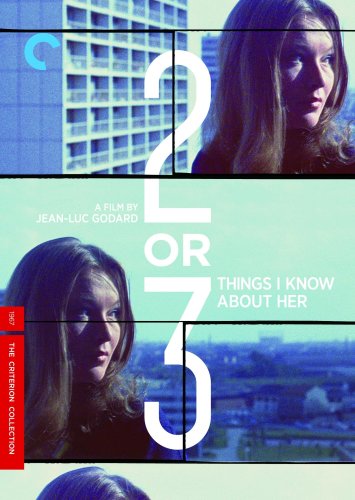 Jean-Luc Godard is smarter than the rest of us, but happily, he wants to share his toys.

The intelligence and charisma on display in some of Godard's early work can be dizzyingˇhe's brimming with knowledge not only about film history, but about larger cultural trends at work, about the nature of our industrial economy, and certainly about the secrets of human psychology as well. There's unquestionably a preening quality to some of his work, part and parcel with his public persona from the timeˇhis fiery intelligence animates everything he does, and if you don't already realize that he's the smartest guy in the room, he'll be happy to remind you. But it's worth contending with some of his egotism when the product is as provocative and entertaining as 2 or 3 Things I Know About Her, a challenging and ambitious film that's up to Godard's heady standard.

On the most mundane level, this is a film about Juliette, a Parisian bourgeois who starts turning tricks, more or less for sportˇGodard offers a deeply empathetic portrait of her, and he's blessed with the marvelously expressive Marina Vlady in the role. But the scope of the film is far beyond merely thatˇit shares some similarities with BuĎuel's Belle de jour, released the following year, but Godard's movie is for those who don't think that the social critique in Mrs. Warren's Profession is sufficiently Marxist. The real triumph of the picture is the sustaining of our interest in Juliette while engaging in a sustained socioeconomic critique of Western industrialized economiesˇGodard can find poetry in the changing French landscape, even where ugly new buildings are being erected, while also challenging us to ask why our cities are so horrid, and so many of us are ailing in this age of alleged plenty.

Godard loves breaking narrative conventionsˇthere's plenty of contrapuntal voice-over (which he delivers himself, in a conspiratorial whisper), and much breaking of the fourth wall, with Vlady and others talking directly to camera in Brechtian, presentational style. Admittedly all this intellectual firepower isn't always the most visceral; it can be a movie that appeals to every part of your body from the neck up sometimes, and it may be my personal prejudice from this side of the Atlantic, but I'd say that the movie is marred by some childish, kneejerk anti-Americanism. (An American Vietnam war correspondent is on holiday in Paris, cavorting with call girls; he wears a t-shirt emblazoned with the stars and stripes, and though he's supposed to be from Arkansas, the actor sounds as Arkansan as Bill Clinton does French.)

Criterion's DVD release offers a fair amount of illumination on the movie, especially considering that you get the sense that Godard would happily keep us all in the dark. Adrian Martin's engaging commentary provides cultural context for the film, situates it in Godard's career, and offers great tidbits about his working methods, especially with his actors. Some archival footage is groovy for style, mostlyˇthis includes a 1966 French TV interview with Vlady, showing her on set or riding shotgun with the correspondent; and Godard engaged in conversation with a bureaucrat from the Ministry of Economy and Finance, a hilariously mismatched debating pair. Godard chum Antoine Bourseiller recalls the good old days with JLG, who sounds at best like a trying friend; and along with an original trailer is the very useful 2 or 3 Things: A Concordance, which provides some literary and cultural reference sfrom the film, ranging from Brecht to Simenon to Wittgenstein to Flaubert. The accompanying booklet features a celebration of the film by Amy Taubin, and correspondence regarding the magazine article that provided Godard's inspiration for the picture.