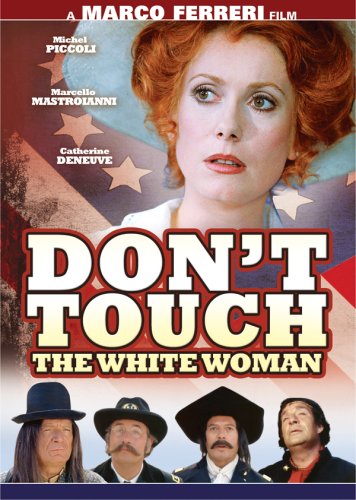 French cinematic royalty has a go at America. Hilarity ensues.

It's difficult in hindsight to know if time has simply been unkind to this film and its "edgy" politics, or if it was simply smarmy and self-congratulatory to begin with. (I'm going with what's behind Curtain #2.) It's a gaudily high-concept picture, and it's easy to get hypnotized by the names above the title. I'd strongly suggest that you resist the temptation, friends.

Director Marco Ferreri's notion is to re-tell the story of Custer's last stand, that most American of Icarian history lessons, with French actorsˇhis cast wears 19th-century garb, but they're shot on the streets of early 1970s Paris, so the deliberate cultural incongruities are essentially what this movie is all about. Ferreri is clearly a victim of kneejerk anti-Americanismˇwhether or not he comes by his politics rightly is his business, but his movie is a moronic cartoon, really, almost an American right wing parodist's version of The French And How They Hate Us. (All that's missing are the obligatory tiresome Jerry Lewis jokes.) Ferreri's grand conclusion: the Americans are stupid! And they're imperialists! Also, they're stupid!

We're obviously supposed to connect the cultural dotsˇthis isn't a movie about General Custer at all, but rather serves as a clumsy allegory for Vietnam, and Watergate, and whatever else you want to throw into the mix. His actors are committed and talented, but in the Parisian cityscape they look like a renegade bunch of Civil War re-enactors who took a wrong turn at Gettysburg, or something. Marcello Mastroianni is particularly fierce in maintaining the opera bouffe style of the piece, but it makes him seem like a Keystone Kop, Naples Division. Ferreri's grand innovation, he seems to think, is telling the tale of Custer's demise from the perspective of the natives, and tossing in a lot of slapstick. Basically this is a movie for those who thought that the problem with Dances with Wolves is that it just wasn't funny enough.

Everybody in the picture is tailed by a French intellectual in a college t-shirt, presumably a Ferreri stand-in. If you didn't get enough in the feature, an excerpt (2m:55s) from a documentary about the director is another chance for him to tell you how insightful and clever he is.