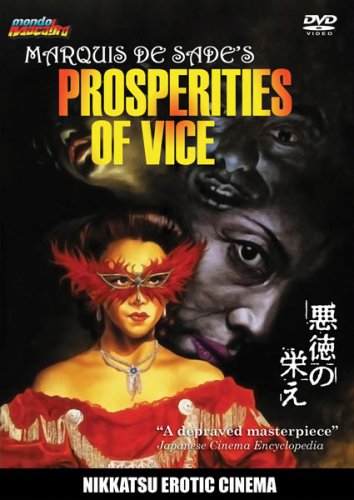 Mondo Macabro does it again, taking us back to 1920's Japan and a count's obsession with the Marquis de Sade. In a word...awesome!

Despite the massive variations and ways it can be obtained and viewed these days, the argument can still be made that no one does pornography like the Marquis de Sade. This infamous, 18th century French writer put his strange (at the time) ideas regarding human sexuality on paper while imprisoned, and theyíve lived on in various forms to this day. In the 1970s, Japanese film studio Nikkatsu, reeling from a drop in ticket sales, turned its attention to putting eroticism on the big screen. While these werenít as graphic as ěX-ratedî material of the era, they still involved quite a bit of simulated on-screen sex, but with a Lynchian tinge, enabling them to appeal to the art house circuit, as well as Joe Pervert.

Years of success with this sort of film followed, and in 1988, Nikkatsu and the Marquis indirectly got together in the form of Marquis de Sadeís Prosperities of Vice. Itís 1920ís Japan and a well-to-do Count (Yasumi Hara) and his wife (Seiran Li) build a theater to honor the works of the Marquis de Sade. They plan to go above and beyond merely discussing the acts portrayed in these works, however, and instead hire ěactorsî who are far from professionals. Instead, he finds the worst possible people imaginable: thieves and prostitutes among them. The Count invites all of his wealthy friends, who enjoy every minute of what theyíre seeing, but as these ěplaysî become more frequent, and genuine relationships are formed, it begins to feel like the Marquis de Sade himself is presiding over this theater.

Towing that line between ěSkinemaxî-worthy material and valuable, art house fare, has always been a tough thing to pull off, but director Akio Jissoji does a great job in doing so. Thereís actually far less simulated sex than expected, and the story being told turns out to be truly engaging. Buoyed by Yasumi Haraís brilliant performance as the Count, the actors are top notch, regardless of how risquČ their on-screen actions get. Hara rises above them all though, embodying this disturbed, yet extremely vulnerable individual with a level or realism that rivals any of todayís top actors. Seiran Li is also excellent as his wife, a role that becomes more and more complex as the movie evolves, and is far more difficult to handle than initially expected.

Another surprise is just how good the film looks. Despite the dreary, often perverted nature of the proceedings, things look great throughout thanks to the use of bright, colorful costumes. Most of the set pieces feature a dark quality to them, but these vivid, colorful costumes rise above and blend in quite nicely with deep blacks and shadows. Plus, itís always easy to make out the distinct features of the naked bodies on display, an extremely important quality for much of the filmís target audience, and, admittedly, an important part of the movieís aesthetic.

Mondo Macabro continues to show their devotion to cult films like Prosperities of Vice, in the form of the best possible DVD releases we can expect, given the availability and health of the source material. Itís clear that some restoration was performed, as images are mostly crisp and detailed, although some inherent grain creeps up at times. The Dolby Digital 2.0 mix is also quite impressive, yet limited. We also get a nice documentary and even a look at the history of Nikkatsu, which is a very nice touch.