DVD Review: RIPPED OFF: MADOFF AND THE SCAMMING OF AMERICA

"Did he start out as an honest man?" - New York Times reporter Diana Henriques, wondering 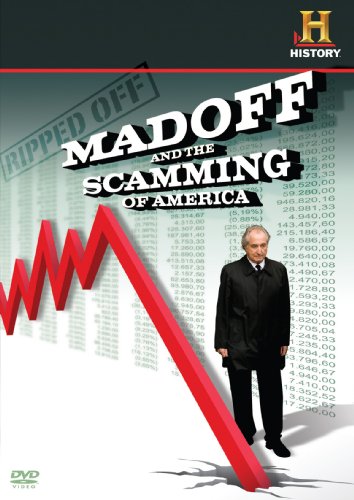 Bernie Madoff: Bad for the Jews? A consideration.

This breathless documentary hyperventilates, a lot, about Ponzi schemer Bernard Madoff, but isn't particularly illuminating, if you've followed the Madoff scandal even casually. You can see the impulse at work hereóthe economy has gone all to hell since the fall, and we're looking for someone to blame, and Madoff is an easy and worthy target. There's no doubt that this is a bad, bad man, but no single individual is responsible for what's happened to the economyóthat doesn't make for good news footage, though, and this is very much akin to what happened with Charles Keating and the savings-and-loan scandals of the 1980s, that is, personalizing in one odious man all the systemic ills that have hobbled so many of us.

Lots of journalists and historians are interviewed, and there are many, many comparisons with Carlo Ponzi, whose 1920s pyramid scheme crashed and led to his name becoming synonymous with these sorts of confidence games. The documentary is at its best, in fact, in giving us the history of confidence men in America, dating back at least to Herman Melville's great portrait of riverboat gamblers; unsurprisingly Madoff didn't cooperate with the filmmakers, so most of the footage we see of him is of perp walks. Novel too is the brief look at his middle-class childhood and discussion of his aspirations.

No one really wrestles with the bigger questions, though: why were so many smart people so credulous? (All the famous victims get trotted out: Steven Spielberg, Elie Wiesel, and so forth.) And how come so many regulators were asleep at the switch for so long? We don't really get answers, but hear lots of buzzwords, like hedge funds and derivatives and credit default swaps.

The Madoff piece is twinned on this disc with Crash: The Next Great Depression? (44m:33s), and the unhelpful answer to the question in the title we get is: maybe! We don't really know if it's 1929 all over again, but the documentary wants to push the parallelsóessentially with George W. Bush as Herbert Hoover, and Barack Obama as FDR. The folks you'd expect to see are on handóHenry Paulson, Nancy Pelosióbut the only part that's novel are reminiscences of Depression-era America, many of them delivered, improbably enough, by Jerry Stiller. It's got the spoonfeeding style and sweeping simplification that's characteristic of the instructional videos I was shown in middle school. If you want to get a better primer on how billions just disappeared, I'd recommend NPR's "Planet Money" podcast instead.