DVD Review: IN THE REALM OF THE SENSES (BLU-RAY) 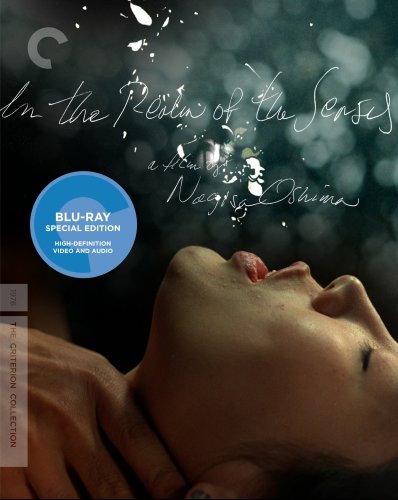 This ņloveŅ story essentially tells the tale of Sada (Eiko Matsuda), an ex-prostitute who is now a maid in the employ of Kichizo (Tatsuya Fuji). When Sada accidentally sees Kichizo having sex with his wife, she falls in love with him. It isnĒt long before the two are having an illicit affair, which they arenĒt even seemingly concerned about hiding from anyone. As their relationship continues they get more and more daring in their sexual acts, marring the line between exploring each othersĒ fantasies, and becoming dangers to one another. When it appears that itĒs time for this affair to end, itĒs no surprise that it does, but how it does pushes every possible film taboo to the limit.

We see our first graphic sex scene a mere four minutes into the film, and this sequence almost feels like a pathetic excuse by the filmmaker to show us exactly what weĒre in for during the rest of the running time. Still, despite nearly every scene involving someone copulating with someone else, it never crosses the line into exploitation. There is a story to tell, and after the shocking final five minutes, it all comes together quite nicely. This is a brilliant film that uses sex to get under our skin, so to speak. Few of these graphic sequences are erotic or titillating, and the film has a grimy, dirty look to it, thus crafting a mood that might not be appealing initially, but is truly effective in practice. ItĒs clear that Oshima could care less about his audienceĒs own, personal, moral boundaries, and such an attitude only makes this film that much stronger.

This is a difficult movie to get through at times, but if you can make it through the final scene without getting nauseous, youĒve got a pretty strong stomach. You might think youĒre prepared for this last bit after having sat through virtually 95 minutes of non-stop sex, but even if youĒre the most avid gore hound out there, itĒll be difficult to keep from cringing at what youĒll see. To top it all off, if youĒre a man, I almost recommend just stopping the film after an hour and a half. Still, we all know that this talk is only making you want to witness this even more, and in doing so, you will have witnessed a scene and a film that has polarized respected critics and movie buffs around the world for the last three decades.

CriterionĒs Blu-ray disc presents Senses in its original 1.66:1 aspect ratio, and uses a 1080p print to blow away any and all previous home video incarnations of the film. There may be only a few instances where the film shows its age, thanks in large part to amazing image detail, a gorgeous color palette, and total elimination of dirt and grain. The audio is just as impressive as the video, thanks to the inclusion of a lossless PCM Mono track that features crystal clear dialogue that is never overcome by the wonderful Japanese music that makes up the score.

The extras are up to CriterionĒs lofty standards, in that thereĒs just the right amount of them and theyĒre all compelling. For example, the first interview is from 1976 and features the filmĒs two leads. When the French interviewer asks actress Eiko Matsuda about why she chose to be in such a challenging film, she gives an answer that is both honest and unforgettable. We see director Nagisa Oshima interviewed in that older piece, but we also get a new discussion with him, shot in 2008 exclusively for the Criterion Collection. The contrast in what he said 33 years ago and now is reason enough to check out this 17-minute talk. The extras donĒt stop there though, as thereĒs also 12 minutes of trimmed footage, the U.S. trailer for the film, and the best of the bunch, an audio commentary track by film historian and critic Tony Rayns. He basically tells us anything and everything we ever wanted to know about In the Realm of the Senses, from the story to the controversy that has surrounded this film for decades.