DVD Review: THE WILD MAN OF THE NAVIDAD 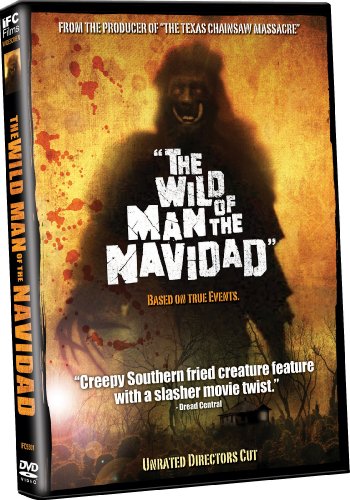 The artwork and description of this awesomely-titled flick has this old-school horror fan more than ready to pop this DVD in the player.

Film buffs everywhere just celebrated the 10th anniversary of one of the most important films in motion picture history. Yes, believe it or not itĒs been 10 years since The Blair Witch Project took the world by storm, but films of its ilk have been around, in a much less-realized form, since the early 1970s. 2007Ēs The Wild Man of the Navidad has a Blair Witch vibe to it, but its roots lie in the documentary/grindhouse horror films of the 70s, such as The Legend of Boggy Creek and even The Texas Chainsaw Massacre. The Wild Man of the Navidad owes even more to Texas Chainsaw, in that the producer of that film, Kim Henkel, performed a similar duty in seeing that this new experiment in low budget, grassroots horror, made its way from script to screen.

Supposedly based on the diary of witness Dale S. Rogers (Justin Meeks), this tale of terror focuses on a Texas legend involving a backwoods man (Tony Wolford) who mutilates anyone that he comes across. Dale has an agreement with the titular character, leaving dead deer carcasses for him, in return for the Wild Man staying away from the locals. When Dale decides to break the agreement, and allow hunters to roam his land, the Wild Man is enraged and any of the locals become fair game, to say the least. With people going into the woods and never returning, a handful of residents become suspicious of Dale, but acting on those suspicions only feed the beast and keep his ņprotectorŅ safe from any legal action.

While thereĒs definitely an audience for a film like this, IĒm not among them. However, I totally respect what filmmakers Duane Graves and Justin Meeks (yep, the man playing Dale is one of the co-directors) have accomplished with this, their first film. They have successfully paid homage to the gritty, exploitative gore-filled features of the genreĒs heyday, cutting deep to the very core of what earned these films such a cult following to begin with. Graves and Meeks take the shoestring budget theyĒve been given and make the most of it, while staying true to the subgenreĒs roots and allowing the audience to simply have fun without having to deal with unnecessary special effects.

If youĒre looking for Oscar-winning performances, youĒd actually be better off watching the latest Lindsey Lohan- driven opus. Using very few, if any professional actors, the directors donĒt care one bit how wooden or unnatural these performers come across as. Therein lies my issues with the film, as it can never really decide if it wants to be a low budget, B-movie, or just another entry in the faux-documentary subgenre alongside Blair Witch or Cloverfield. IĒm perfectly fine with non-actors getting a chance to shine in small films, but they are such an overwhelming distraction that I found it difficult to become involved with the movie as a whole. Despite the acting distractions, though, there was enough gore on hand to at least make the proceedings interesting, so at least most of the characters that these horrible actors are portraying get their comeuppance at some point.

The disc itself is surprisingly thorough. While the audio and video are nothing spectacular, given the extremely low budget nature of the film, the extras collection is good stuff. ThereĒs a great introduction with co-producer Kim Henkel, as well as some featurettes and a commentary track. In fact, I enjoyed the film much more by watching it with the commentary. That way, all of the wooden, horribly-read lines were drowned out by an interesting discussion about the filmĒs low budget shoot, and the awesome gore never left the screen.