ěThe shadow of a man can never stand up and walk on its own.î - Nobukado Takeda (Tsutomo Yamazaki) 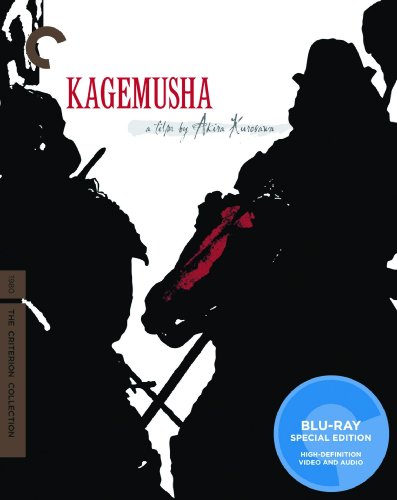 Yet another of the master's amazing films sees the light of day on Blu-ray via The Criterion Collection. Keep 'em coming, Criterion!

The great Akira Kurosawa took the term ěillustrious careerî to a whole other level during his heyday. Arguably Japanís greatest director, Kurosawa is responsible for classics like Seven Samurai, The Hidden Fortress, and Rashomon. However, after the box office flop of 1970ís Dodesíka-den, Kurosawa couldnít get another film financed by his Japanese supporters. This eventually led him to Hollywood, where he finally found financial backing from the very same directors who cited him as a major influence for their most successful films, George Lucas and Francis Ford Coppola. Their support allowed Kurosawa to see his labor of love, Kagemusha, go into production in 1979, and eventually receive a theatrical release in 1980. Now, after an excellent DVD release saw the light of day recently from The Criterion Collection, the Cadillac of home video distribution works their magic once again with this excellent Blu-ray release.

In 1573 Japan, a powerful warlord named Shingen Takeda (Tatsuya Nakadai) is wounded in battle, but manages to instruct his closest allies to keep his good name alive even after his death. His men decide that the best way to do this involves hiring a double, Kagemusha (also played by Nakadai), to fool their enemies into believing that Takeda continues to live. While the enemy is fooled, initially, they eventually send spies to see if their suspicions carry any weight, and that Takeda is, indeed, dead. Generally speaking, Kagemusha has them all fooled, taking to the battle field, himself and waging war with a similar ferocity to the real Takeda. However, it seems like only a matter of time before some discovers this ploy, and such a realization just might come from the most unexpected source you could imagine.

This is an absolutely gorgeous film, which is par for the course for Kurosawaís few color films, but the driving force behind this particular epic lies in the actors. Tatsuya Nakadai is simply extraordinary as both Takeda and his double, managing to create separate characters, despite the audienceís knowledge that weíre actually staring at the same person for three hours. Nakadai plays the roles originally intended for Shintaro Katsu (best known as Zatoichi), and, despite the latterís inarguable brilliance as the legendary blind samurai, Kurosawaís film might have suffered greatly with a different lead actor.

Itís difficult to argue that the first half of this three-hour epic isnít slowly paced and a bit difficult to get through, but once the film turns the corner, the rewards are endless. Then again, Akira Kurosawa tends to take his time in telling his elaborate, detailed stories, never fearing a 180-minute running time. Thatís the case with Kagemusha, but like the best of artists, this film is best appreciated when viewed as a painting, full of lush colors, thought-provoking imagery, and much of its deeper meaning left up to its audience to interpret. Many of Kurosawaís devoted fans (myself included) donít place Kagemusha among his best films, but it is still undoubtedly one of his works, and a truly necessary film that, had he not been allowed to make it, would have left film history without his final works, Ran and Dreams.

Criterionís Blu-ray disc brings Kagemusha to life like never before. Sure, their recent standard DVD release featured a great new video transfer, but this new high-definition presentation is even more impressive. Struck from the original negative, itís obvious that quite a bit of work has been put into cleaning up specks of dirt, scratches, and other blemishes, leaving the awesome, widescreen vistas clean and full of pristine color. The audio is a marked improvement as well, with a Japanese DTS-HD Master Audio 4.0 track providing balanced frequencies and a dynamic richness that brings the battle sequences to life like never before. The only aspect of this Blu-ray that doesnít improve upon the standard DVD are the extras, but, given their greatness the first time around, such lack of improvement is perfectly acceptable.