DVD Review: I LOVE YOU, MAN 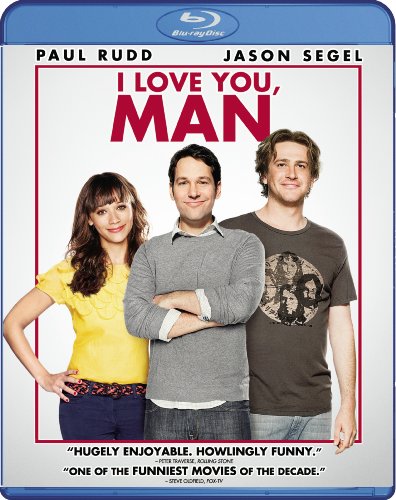 No. I won't do it. I refuse to refer to this movie as a "bromance."

Peter (Paul Rudd) and Zooey (Rashida Jones) are getting married. Wedding planning poses a bit of a problem for Peter, who can't think of a good candidate for best manóhe's been a ladies' man his whole life, going from girl to girl without ever making any guy friends. Desperate to make a connection but too awkward to strike up a conversation with the guys at the gym, he uses internet friend-finder services and goes on blind man-dates his mother arranges. They generally don't go well, ending in awkward apologies (sorry I threw up on you, I don't usually pound beers like that) and uncomfortable partings (I don't usually kiss on the first man-date).

I Love You, Man is takes all the beats of a romantic comedy and repurposes them into a film about male friendship. Peter's "the one" turns out to be Sydney (Jason Segel), a towering man child who lives off his investments and acts like an overgrown (way overgrown) teenageróhis garage is a testosterone sanctuary filled with drums and pornography (watch where you sit). The guys meet cute at a real estate open house (Peter, a broker, is looking to move Lou Ferrigno's house, providing the setup for a lot of inside jokes about The Incredible Hulk) and soon are hanging out every night, doing the stuff Peter should probably have done in high school and Sydney should probably have gotten out of his system by now. Zooey begins to wonder why Peter is spending more time with Sydney than with her.

Initially, it seems rather clever that all the familiar clichČsóthe montages and misunderstandings, the third-act conflict and last-minute reconcillationsóare focused on the best friends rather than the romantic partners. But after about an hour, it becomes pretty clear that there's not much else going onóthis is either sly satire or more of the same tired plotting we criticize in whatever Kate Hudson movie we've seen most recently. That's not to say it's not a lot more fun to watch, provided you're a fan of rambling, improvisational, oh, let's just call it Apatow-ian humor; though the prolific producer wasn't involved, one of his protČgČes directed it, and it stars all the familiar faces (a pinch of The 40-Year-Old Virgin here, a dash of Forgetting Sarah Marshall there). Sub in Segel for Seth Rogen and it's kind of "You Know How I Know You're Gay: The Movie". Director John Hamburg, who worked with Apatow, Segel, Rogan, et al on Undeclared, at least keeps things moving, and has the good sense to bring the movie in at around 100 minutes, though there's still hardly enough story to go.

So, you know, is it funny? It is if you like these actors and this style of comedy (the MPAA rating says it all: "pervasive language, including crude and sexual references"). Rudd and Segel don't offer anything new, but if you like the former in Knocked Up and the latter on How I Met Your Mother, you're going to like them here. And hey, Rashida Jones is cute in a pretty thankless role, and there's Jamie Pressley (Zooey's friend and business partner, and that's about all) and Jon Favereau (he's fat and angry!). Andy Samberg is Peter's younger brother, the least gay-acting gay character in cinema history (I think that's the joke), who is best buds with their dad (J.K. Simmons) who loves his live gay son. And so on. Try to spot the character that would have been played by Kristen Wiig if she wasn't busy filming cameos in every other comedy that came out last year.

I refuse to characterize anything as a bromance, but it's pretty hard to label this anything other than the latest entry in the Frat Pack comedy collection. If you like the others, you'll like this one.

The DVD: Advanced apologies, but I love Blu, man. Ugh. Anyway, this is really a mighty fine disc, with bonus materials that made me laugh a lot more than the film. To get the technicals out of the way: video and audio quality are what you'd expect. The HD transfer is crisp and colorful, with all the clarity and detail you've come to expect of 1080p. The TrueHD 5.1 sounds great, especially during the inevitable pop song montages.

The finished film is obviously a product of a lot of improvisation, and the extras (all of them in HD) offer a look at what might have beenóboth the deleted and extended scenes galleries are essentially just a big bunch of alternate takes and deleted riffs. Sometimes they're funnier than the ones that made the cut. The gag reel runs more than 10 minutes, but is worth watching. The promotional making of featurette of similar length is, sadly, not. It's worth listening to director John Hamburg, Jason Segel, and Paul Rudd's commentary, though. Funny guys. Probably they go into a little too much detail about the old lady they filmed for the, er, exercise bike scene.