ěA wild orchid sang a song to me once. She had the prettiest voice.î - Dave Robicheaux (Tommy Lee Jones) 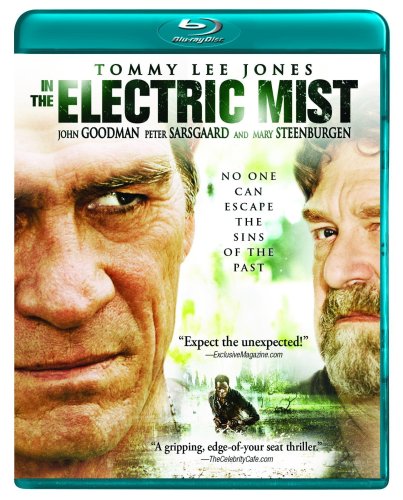 Tommy Lee Jones plays a law enforcement official on the trail of a murderer, that must overcome numerous obstacles along the way. Tell me if you've heard that one before...

Tommy Lee Jones has enjoyed a long, illustrious career, but his latest film, IN THE ELECTRIC MIST, has seemingly taken a longer time to have a chance at a large audience. Based on James Lee Burkeís 1993 novel, In the Electric Mist with Confederate Dead, director Bertrand Tavernierís film adaptation was shot back in 2007. After languishing in release limbo, it was finally scheduled for at least a limited theatrical run earlier this year. Despite a big-name cast, including Jones, John Goodman, and Peter Sarsgaard, that theatrical release never came about. The decision to send the film direct-to-DVD (and Blu-ray) turned out to be a good one, though, as ELECTRIC MIST is a confused, uneven drama that ends as awkwardly as it begins.

Detective Dave Robicheaux (Jones) makes his living roaming the backwoods parishes of New Orleans. Heís hot on the trail of a serial killer with a penchant for making hookers and down-on-their-luck women his victims. Making this search difficult is the presence of a film crew, there thanks to Robicheauxís enemy, Baby Feet Balboni (John Goodman). The star of this film Balboni is funding is the reckless Elrod Sykes (Peter Sarsgaard), whoís constantly drunk, but happens upon the body of a dead black man. This discovery triggers the Robicheauxís vivid memory of a murder he witnessed, involving, you guessed it, a black man. Even stranger, heís also being ěvisitedî by a Civil War General (Levon Helm), who muses with Robicheaux about all things spiritual and logical.

If the above plot synopsis makes it sound like Tavernierís film attempts to bite off more than it can chew, then itís done its job. Thereís simply way too many subplots and angles for a single, 102-minute movie to tackle, and this one doesnít even come close to providing satisfying answers for any of the questions posed. Perhaps James Lee Burkeís novel has the girth and crafting editing required to pull off the thoroughly satisfying tale of murder and deceit, with a dash of the supernatural thrown in as well. Unfortunately, thatís not the case in this cinematic translation, and the well-assembled cast suffers (along with the audience) as a result.

While Tommy Lee Jones is at his usual, above average best, when all is said and done, the key word is ěusual.î It was a mere five minutes into the film when I realized that this is the same performance that Jones has been giving in at least his last four movies. Sure, those movies (especially NO COUNTRY FOR OLD MEN) are much better than IN THE ELECTRIC MIST, one canít help but think that Jones is settling into a bit of typecasting that could result in a sudden decrease in the quality of his work. The rest of the cast, including the always great Sarsgaard (KINSEY) look as lost as the muddled plot and subplots in this huge misfire.

Imageís disc is more impressive than the film itself, thanks to a gorgeous HD 2.35:1 anamorphic widescreen presentation, featuring crisp images that practically pop off the screen at times. Weíre given the option of a Dolby Digital 5.1 mix as far as the sound goes, but the lossless, DTS-HD MA 5.1 is the way to go. Extras-wise, we only get the filmís theatrical trailerÖoh the irony!