"Patrick has a way with people. His way ... or else!" - Advertising materials 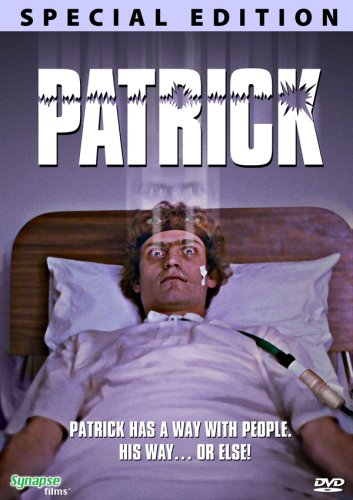 Revisiting films like Patrick makes me yearn for the days of 70s horror. They just built ļem differently back then. True, this wonĒt win any awards for being the most rollicking genre film ever made, but if you like dollops of atmosphere with your horror, than this is as good a thriller as any. Director Richard Franklin takes what probably looked like a Carrie rip-off on paper and creates a quietly riveting ± and spooky - slow burn. The kind of horror film that sneaks up on you and, if youĒll indulge me for one quick second, that they just donĒt make anymore.

Susan Penhaligon takes center stage as Kathy, a young nurse who finds herself assigned to care for Patrick (Robert Thompson), a mysterious coma patient with a murderous past. HeĒs kept alive by life support despite the fact that the doctors believe him to be a meat sack. ItĒs only Kathy, detecting something in the young manĒs eerie, blank visage, that suspects otherwise.

ThereĒs no real mystery to the film: we know from the outset that Patrick committed the murder of his mother and boyfriend and that heĒs somehow able to wield telekinetic powers. But Franklin wisely spends a lot of time mucking with audience expectation: the long, frozen shots that linger on our patientĒs stone-cold face, the stagnating glances of the titular characterĒs hospital bed. When is Patrick going to catch poor Kathy by surprise and spring up from that bed? YouĒll have to watch the film to find out.

ThatĒs not all there is (thank God), but itĒs a good example of FranklinĒs minimalist approach. He gets lots of eerie mileage out of the hospital setting and from an interesting script that explores KathyĒs ties to our comatose character. Much time is spent (maybe too much?) on KathyĒs personal life, her failed marriage and budding attraction to a new suitor. Clocking in at nearly two hours, I would argue that the film might overstay its welcome just a tad, but I dug the measured pace and incremental suspense. Franklin observed Alfred Hitchcock while on the set of his 1967 thriller, Topaz, and it shows. While not quite as successful at manipulating the viewer as his mentor, FranklinĒs work possesses a playful spirit that will satiate those willing to kick back and surrender to the story- flaws and all.

Patrick is an interesting starting point for Richard Franklin, whose dedication to the genre would only strengthen with each subsequent film, beginning with 1981Ēs Road Games. ItĒs not surprising that he was given the unenviable task of resurrecting Norman Bates after 22 years with Psycho II, a sequel that, for my money, stands tall as a worthy follow-up. If Patrick doesnĒt quite hit the bullĒs-eye in the way that many of his later works would, itĒs a must for fans of the late, great director as well as anyone looking for a creepy and classy example of 1970s horror.

As is the case with all of SynapseĒs recent releases (Syngenor, Dark Forces, Strange Behavior and Thirst), this title appears to be a direct port of the previous DVD, released by Elite Entertainment with one welcome addition: an anamorphic transfer. As an owner of yesterdayĒs Elite disc, I will say that, while not perfect, this disc boasts a solid image presentation for a low-budget flick from thirty plus years ago. The grain is film-like and there's no compression nonsense. The film has always had a slightly dull color palate (dating back to VHS and the aged theatrical trailer) and this new disc is no different. The muted tones are nicely conveyed and offer a clean image. Lastly, the film is correctly framed at 1.78:1. I donĒt have much issue with the presentation here. ItĒs a good job from Synapse, as always.

There isnĒt a lot to say about the mono recording. ItĒs clear and crisp. Dialogue is clear, melding well with the sound effects ± neither overpowers the other. I know a lot of purists who dig on the inclusion of mono tracks and while Synapse didnĒt give us an option here, a 5.1 mix isnĒt necessary. The mono track gets the job done.

Richard Franklin and Everette De Roche (the screenwriter) sit down for a pleasant audio commentary, also featured on the Elite disc. There are no dull spots to be heard and these guys have a good time reminiscing about the film. The only other supplement is a theatrical trailer and two TV spots.