"If you want to stay alive, don't get too attached to your guns." - Shuji (Joe Shishido), A Colt Is My Passport 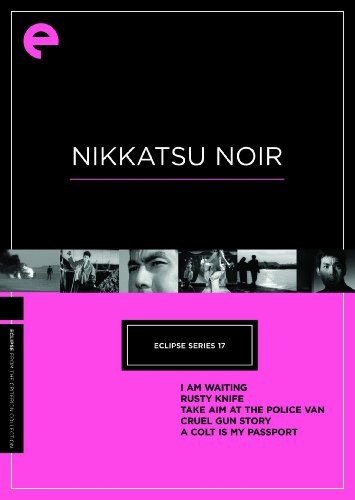 A fistful of Japanese crime pictures, in a super groovy pink and black case, from Criterion. Rock on.

There's a kind of hinky underlying premise behind this setˇthat the golden age of noir came to Japan a good fifteen years after Hollywood, which is kind of curious, given that so many of the psychological underpinnings of what we've come to recognize as the genre have to do with the physical and emotional shards of World War II. Just as noir pictures were riding off into the sunset in Los Angeles, they seemed to be hitting their stride in Japan, particularly at the Nikkatsu studio, and what we get here are five films cherrypicked for us by our friends from Criterion. These alone aren't enough to make sweeping generalizations about Japanese noir, but don't worry, that won't stop me.

The first entry, I Am Waiting, made in 1957, has learned its lessons well from the Hollywood high style. Director Koreyoshi Kurahara's moody picture features a fetching lost soul down by the river, stumbled upon by an unsuspecting young man with his own dark secrets. Does she need a touch of kindness to bloom again, or is she a femme fatale waiting to refuel and attack? Can she outrun her past? Can he do the same with his? It's a movie, in many respects, about the futility of offering kindness to strangers, a film in which no good deed goes unpunished.

There's a fair amount of ungainly exposition, and really, not much of a storyˇthere's the predictable, inevitable romance between them, but the film is incredibly strong on style and mood. (It turns out that she's a nightclub singer working for gangsters who got a little grabby; he's a prizefighter who killed a guy in the ring, with a brother who had lit out to make his fortune in Brazil but hasn't been heard from in a year.) She becomes a waitress in his two-bit joint, and moves to the periphery in the second half of the picture when the yakuza track her down there. What's especially enchanting about the film is the balletic violence, which here isn't an oxymoronˇthe knife fights and the boxing flashbacks will put you more in mind of West Side Story than of Tarantino, and that's not a bad thing in this instance.

The second feature, Rusty Knife, overflows with so much backstory that you sort of hope that the DVD comes with its own flowchart; alas, gentle reader, we are on our own. It's got a fantastically staccato storytelling style, as the gobs of history between the characters come at us between bursts of stylish action and violenceˇsomebody took the fall for somebody else in a Yakuza slaying of a councilman a few years back, which was pathetically covered up to appear as if it were a suicide. Now the jig's up, and somebody's naming names.

It's classic noir territory, essentially a movie about the alleged honor among thieves, and the internecine Yakuza rivalries and hotheaded button men is what make this one worth watching. The leader of one of the families, the Katsumata, looks like a Japanese George Raft, and is a hothead in the mode of Santino Corleoneˇhe may think he'll get away scot free, but we've seen enough gangster pictures to know better. It's a movie that asks if it's possible to escape one's past, and offers a resounding and depressing no to that question; it's also a keen reminder of the essential urbanity of the genre, as this is all industrial crime in the growing postwar city of Udaka, fertile territory for the expansion of industry on both sides of the law.

In the next picture, Take Aim at the Police Van, director Seijun Suzuki more or less does his Samuel Fuller apprenticeship, as the film is marked by the profound influence of the on-the-cheap American auteur's style. As you might have guessed from the title, the movie opens up with an assault on a vehicle transporting prisonersˇsome are sprung, but more crucially, some are killed, and Tamon, the prison guard in charge of the transport, is given a six-month suspension. Initially he seems awfully sanguine about his forced vacation, but he quickly gets drawn back into the muck. And there's no shortage of muck.

Tamon tries to tease out the details of just went down, and he's like Harry Caul ferreting through even the most passing and seemingly insignificant detail; it's no coincidence, surely, that relevant witnesses are getting offed with the efficiency and frequency with those who may have spied something on the grassy knoll. Suzuki's challenge in the piece is maintaining its frenetic pace, and he's certainly up to the taskˇthe second half of the picture, in fact, is a little short on story, with swatches of dialogue only briefly interrupting what's essentially one long action sequence, motivated by the search of a criminal mastermind known only as Akiba, who operates with all the menace and secrecy of Kayser Soze.

If Fuller is the muse of that picture, Stanley Kubrick is the guardian angel of the nextˇdirector Takumi Furukawa's Cruel Gun Story owes a sizable debt to Kubrick's The Killing, both in its plotˇa heist involving the big take from a racetrackˇand structureˇboth films love to jump around in time, in a manner made more familiar in recent years by Quentin Tarantino with Reservoir Dogs. Here we get a button man, Togawa, sprung from prison two years early, because the boss wants him back in the foldˇhe's got a sister in a wheelchair, no lessˇand becomes the go-to guy for the fabled one big score, here an armored car robbery that should not 120 million yen.

Both the filmmakers and we have seen our share of these stories, so the pleasure is in seeing the story go through its pacesˇTogawa gets the band back together, the job is planned down to the most minute detail, and inevitably things do not go precisely according to plan. There's a sense that the film is happy not to tread any new cinematic ground, but rather to spend its considerable energy reinvigorating stuff from the old school. Without sarcasm, it truly is a reminder that if you're going to steal, steal from the best.

Finally, you can almost feel the genre winding down in A Colt Is My Passport, the most self-conscious of the five films in the set; the search for Western analogues may say more about our need to make the different seem familiar than about anything else, but it's hard to watch this film and not think that director Takashi Nomura is a hardcore fan of Sergio Leone. Nomura lacks both Leone's sense of opera and Melville's sense of grace, but he's the canny corporatist of the bunch in this setˇwhatever else you can say about the meltdown on Wall Street over the past year, as far as we know nobody at Goldman Sachs tried to get anybody at AIG done in by hit men.

The first challenge of the film is to find a suitable way to execute Shimazu, a titan of industry, and it's an execution performed with grace and in eerie silenceˇNomura has a Morricone-esque score, but he knows when silence is best, and in some respects the most interesting thing about this movie is its sophisticated use of sound.

As is typical of Criterion's Eclipse line, this set comes basically without extras, the exception being Chuck Stephens' brief but fanatically intense liner notes for each of the five films.