Do you think there's something more to my life than my relations with young women? - Roman Polanski 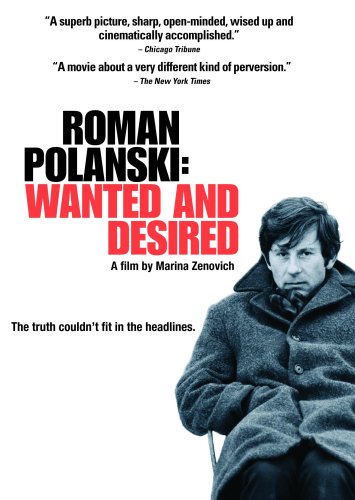 One need not excuse or minimize what happened between Roman Polanski and a 13-year-old girl in Jack Nicholson's pool in 1977 to recognize that Polanski has led an extraordinarily complicated and morally challenging life. He escaped the Third Reich; his wife, 8 1/2 months pregnant with their first child, was brutally slaughtered by disciples of Charles Manson; he's had enough sorrow for a handful of lives, though that doesn't make it all right for his Humbert Humbert streak, thanking heaven for little girls. This fair-minded and gripping documentary is an extraordinarily thorough look at what happened to Polanski in Southern California in the late 1970s, both in a Santa Monica courtroom and in the court of public opinion. It's a morality play with all sort of shades of gray, and it's a fascinating watch.

The facts of the case don't seem very much in dispute: Polanski took a 13-year-old to Nicholson's home on Mulholland Drive, ostensibly for a photo shoot, and shortly thereafter they had sex. Does this make Polanski a child rapist? There's something vaguely sinister about him in the archival footageóeven the most charitable would recognize that he's a man who largely keeps his own counsel. Director Marina Zenovich and her team have done a remarkable job not only in tracking down some amazing archival footage, but in persuading almost all of the surviving players in the tale to sit for new interviews. (The notable exception to this is Polanski himself.) What's striking is how similar the accounts are from Roger Gunson, the prosecutor, and Douglas Dalton, Polanski's defense attorney; perhaps most galvanizing of all is the interview footage with Samantha Gailey, the girl in question, now in her 40s, the mother of 3. (She was unnamed for decades; the spurious though perversely intriguing rumor circulating for years was that the girl in question was in fact Justine Bateman, before the Mallory years.) A couple of outliers want to turn this into a cheap tawdry Hollywood tale, for their own reasonsómost prominent among them may be Philip Vannatter of the LAPD, familiar to a later generation as one of the arresting officers in the O.J. Simpson case.

The documentary doesn't shy away from Polanski's dark sideóhe had to endure things that seem absolutely unendurable, like being the principal suspect in his wife's murder, according to the tabloid headlines, at least. But the director isn't the villain of the pieceóthat prime piece of casting is reserved for Lawrence Rittenband, the judge presiding over the case. He's monstrous, a limelight hog and celebrity hound who makes Lance Ito look like a wallflower; and he was stupid enough to solicit advice about the case from members of the paparazzi, who relate the tales in jaw-dropping wonder nearly thirty years after the fact. (Rittenband died a dozen years ago, and hence isn't here to defend himself.) Polanski's predilection for underage girls is repellent and what he did to Gailey deserves punishment; but nobody warrants the double dealing and the dog-and-pony shows that Rittenband tried to orchestrate, almost exclusively so that he could pad out his scrapbook with prominent and favorable clippings.

The film shows an appreciation for Polanski's work as well, though the cross-cutting between his movies and his life can seem a little heavy handed. (There's lots of Rosemary's Baby stuff around the Tate murder, for instance, and the necessary inclusion of Polanski's indelible cameo in Chinatown.) Even if you've got just a passing familiarity with Polanski you probably know how this endsóthe director flees to Europe to avoid the long arm of the law, and still isn't permitted to return to his adopted homeland, not even to collect his Oscar for The Pianist. Knowing where it's headed doesn't sap the story of its drama, though, especially as you realize, as the prosecutor points out, that the director is living out his life as if it were a Polanski film, with the twin themes of water and corruption.