"Must I give up my freedomójust to prove you a fool?" - Marquise de Bardelys (John Gilbert) 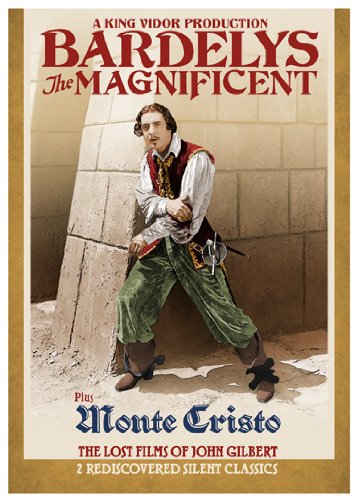 The memory of silent screen star John Gilbert is not helped at all by the fact that so many of his pictures are no longer extant. But this new set from Flicker Alley helps correct that, with recently-discovered prints of two of Gilbert's major films, which happen to be the only ones of these films known to exist. We're very lucky indeed to have these long-hidden classics unearthed and brought to DVD in lovely restorations.

The headlining picture in the set is Bardelys the Magnificent (1926), an adaptation of a novel by the once-popular but now forgotten Rafael Sabatini. Unlike many costume pictures of the 1920s and later, it doesn't take itself very seriously, and at times shoots into parody of the Douglas Fairbanks classics of the period. The story is set in 17th century France, under King Louis XIII (Arthur Lubin). The Marquise de Bardelys (Gilbert) is a rakish lover, who is much in demand amongst women (married and otherwise), though he has run afoul of the wicked Comte de Chatellerault (Roy D'Arcy). The Comte tricks Bardelys into a wager that the Marquise will not be able to get the innocent Roxalanne de Lavedan (Eleanor Boardman) to fall in love with him. On his way to make his attempt, Bardelys makes the mistake of disguising himself as RenČ de Lesperon, who is being pursued by the King's men for treason, and is injured near the de Lavedan home. Nursed back to health by Roxalanne, whose family is sympathetic to the treasonous faction, Bardelys soon falls genuinely in love, and is put in a difficult situation when Roxalanne learns the truth and turns him over to be tried and hanged.

It's terrific that this film has managed to survive, especially in a print that's in such marvelous condition. The visuals are striking, with meticulously-designed costumes and frequently impressive photography from a number of unusual angles. One of the visual highlights is a love scene, brief fragments of which had been known to survive previously, as Bardelys and Roxalanne make love in a rowboat passing beneath willow boughs. Although the one surviving print is missing its third reel, luckily a substantial chunk of that missing footage is found in the film's trailer, which somehow survived when those of many other pictures of the era did not. The missing pieces are quite adequately filled by the device of stills and intertitles, and one doesn't feel anything major is missing and the picture is entirely enjoyable in its present state.

And quite enjoyable it is: the love scenes don't stall but have excellent chemistry (though not as steamy as Gilbert's notorious later scenes with Garbo), and the comedy sequences, largely thanks to George K. Arthur as an interfering country bumpkin, work very well. But best of all are the climactic action sequences, which take the Fairbanks model and run with it, with plenty of stunts and action and a suitably intense sword fight to finish things off. While Bardelys the Magnificent is a vital piece of cinematic history, it's also a vastly entertaining romp that is pleasing to the modern audience and brisk in its pacing.

The print quality on Bardelys is astounding, with mild speckling and occasional wear visible, with only one significant tear. There's plenty of detail and superb contrast (compare the blown-out quality of the segments lifted from the trailer to see just how excellent this looks overall). The Mont Alto Motion Picture Orchestra contributes an orchestral score, and there's also an alternate piano score. Both have first rate sound quality and the Mont Alto score, as usual, is empathetic to the picture without ever getting in its way.

The companion feature is another Gilbert film extant only in a single print, the 1922 adaptation of Dumas' The Count of Monte Cristo. Gilbert spends much of the time in heavy makeup (not always convincing) as Edmond Dantes, who has wrongfully been sent to prison at the Chateau d'If, and learns of the existence of a fabulous treasure from another prisoner, AbbČ Faria (Spottiswoode Aitken). Dantes engineers an escape from prison, recovers the treasure and sets in motion his revenge against the four miscreants who got him locked up (played by Albert Prisco, William V. Mong, Ralph Clotinger and Robert McKim), as well as Mercedes (Estelle Taylor), the faithless woman who married one of them after Dantes was "disappeared."
The attractions in any adaptation of this work center on the glories of revenge, and Monte Cristo does not disappoint too badly in this regard. It's surprising faithful to the massive novel in its 1h:47m running time, though some major episodes are perforce dispensed with via a single intertitle. Gilbert gives a sensitive reading to Dantes, at first hopeful and trusting, then despairing, and finally monomaniacally driven yet susceptible to sympathy and reason. The editing could be tauter, since parts drag a little, but the picture carries across the hopelessness and anguish of solitary confinement exceedingly well. There are excellent examples of the use of closeups for expressive effect and emotional impact throughout, making it somewhat advanced in its technique.

I'm very pleased to finally see this picture, even though the print, from a Czech source, is indeed "worn and choppy" as the cover warns; there is a fair amount of wear and the source print is lacking in contrast, and it is indeed quite splicey (which results in some continuity problems). But the bulk of the film is present and watchable, and we should be more than grateful for that. It's an excellent companion to Bardelys, since one can see just how Gilbert had matured as an actor in four short years; it also emphasizes the tragedy of Gilbert's later career after he ran afoul of Louis B. Mayer and ended up a ruin of a man shortly afterwards. The feature includes a piano score by Neal Kurz that is rather too busy for my tastes and tends to distract a bit.

There are some good extras present as well. Jeffrey Vance and Tom Maietta contribute a fact-filled commentary to Bardelys though they are too often guilty of reading rather than commenting, and indulge in a little name-dropping and self-plugging that's a shade annoying. But it's undeniably informative and well worth listening to. They also have produced a lengthy interview (32m:15s) with Gilbert's daughter, Leatrice Gilbert Fountain, which contains many reminiscences (not all of which agree with the facts stated in the commentary). If you like stills, there are many here, with a set of galleries with well over a hundred photos of the production, cast, crew and promotional materials. Monte Cristo has its own photo gallery as well as a copy of the 1921 contract Gilbert signed with Fox for a pittance. Finally, there's a substantial booklet that contains more information about the films and their rediscovery as well as Gilbert's career in general.