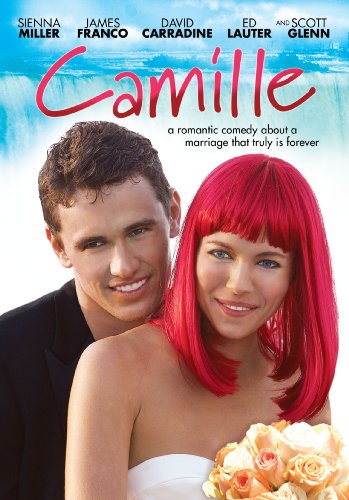 I'll pretty watch anything rising star James Franco is involved in these days, but there has to be a good reason that this sat on the shelf for so long.

Since the popularity of the DVD format has hit its peak in recent years, weĒve seen more and more films with even the slight hint of problems simply sit on a shelf somewhere, eventually making their debut on the budding format. 2007Ēs Camille is the latest of these to see the light of day on disc, after making a decent run on the festival circuit a couple of years ago. ItĒs not difficult to comprehend the reason why Camille failed to make its mark theatrically, as it is the epitome of a romantic comedy at first that is totally turned on its ear by the half-hour mark. Of course, it doesnĒt help that its star, James Franco, has reportedly expressed his dislike for the film, but, this is certainly a film that deserves a shot to become a cult hit, despite some major flaws.

Camille (Sienna Miller) is madly in love with the man she is about to marry, ex-con Silas Parker (Franco). The problem is, Silas has nothing but disdain for Camille. He canĒt stand her voice, her constant need to talk incessantly, and annoyingly clingy, lovey-dovey ways. It appears that Silas is marrying Camille as part of a deal he may have struck with her uncle, Raymond (Scott Glenn), the town Sheriff, to keep him out of jail. Silas upends his part of the deal and marries Camille, but when their Honeymoon motorcycle trip takes a tragic turn, Silas realizes he is stuck with Camille, and the words ņtill death do us partŅ donĒt exactly always ring true.

I honestly had no idea what to expect from this marriage of two of our better young actors (Franco is a huge favorite of mine), and, at least for the first half hour, I was on board with this quirky, daring vision that director Gregory Mackenzie was trying to pull off. Once the filmĒs major plot twist happened at this point, things remained intriguing at first. Then, probably at the 45-minute mark, I realized that Mackenzie had me on a rollercoaster that I had no chance of getting off of anytime soon. Parts of the film worked wonderfully, with Miller giving it her all in the epitome of a demanding performance. However, Franco never really seemed too interested in what he was being asked to do, and such obvious passive acting often diminished his scenes. Yet, Miller is so powerful when her performance could have easily descended into pure camp, that itĒs nearly impossible to take your eyes off of her, and thus, the film itself.

One of the things Camille does not have going for it is that its soundtrack is among the worst to ever accompany a film. While the music that plays over the discĒs main menu should have clued me in to what was to come, musically, nothing could prepare me for the absolutely horrendous song that made my ears bleed (not literally) at right about the 60-minute mark. Of course, this is at about the same time that the movie itself goes from dark, edgy dramedy to just plain fall-off-the-rails bad, but this song is simply ridiculous. The score, itself actually works for the most part, but the songs used in the soundtrack seem to have been thrown in during the editing process for whatever reason.

Despite its cheesiness, kudos to Mackenzie for having the guts to deliver a not-so-Hollywood ending. If he had taken the simple route and made everything cheery and hopeful, then the rest of the film would have been rendered totally pointless. Instead, Mackenzie has himself a film that, if enough of an audience gets a hold of the DVD, has a chance to become a bona fide cult classic, whether James Franco likes it or not. The DVD itself isnĒt much to write home about as an overall package (the filmĒs trailer is the only extra feature), but the audio and video presentations are quite good.