"I never, ever took my career seriously." - Marlene Dietrich 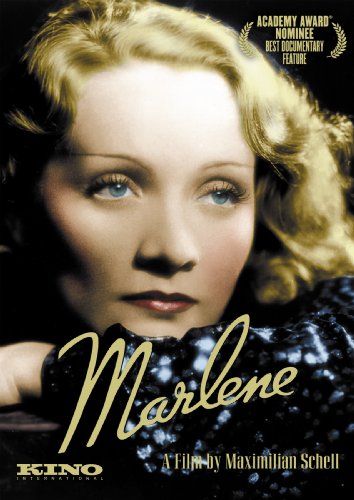 Up close and personal with one of the great temptresses in the history of the big screen.

In the 21st century, what are we to make of Marlene Dietrich? She wasn't a performer of great range; and as our collective notions of sexuality and permissiveness change, she wouldn't be in our time the smoldering, explosive presence that she was in her own. She's frighteningly easy to parody (no discussion of Dietrich is complete without a tip of the cap to Lily Von Schtupp), and a late-career emphasis on her singing seems bizarrely campy. But it's hard to understate just how central she was to depictions of sexuality on screen, how crucial she was to breaking down so many barriers, how she was both at home in Europe and America and yet never quite at home, and how potent it is to make oneself reclusive after so much time under the brightest lights. (Dietrich wasn't quite in the Garbo or Salinger category, but she was close.)

And so Maximilian Schell's overly self-conscious documentary is less a formal biography than a consideration of the woman and her image. It will reap greater rewards for those more familiar with Dietrich's life and work—I've seen my share of her films, but am not as conversant in them as is Schell, so you may find yourself playing some catchup. It's worth it, though—in her later years Dietrich was clearly puffed up with self regard, but the fact that the film is being made by a colleague (they co-starred in Judgment at Nuremberg) means that she speaks with more candor than she would with a fawning biographer.

And it is speaks only—vanity led Dietrich to refuse to allow Schell to film her, so we see her only in film clips and news footage. Still, it makes for a startling character study, starting with her "discovery" by Josef von Sternberg for The Blue Angel, and the fine etching of her iconic persona—sultry yet a bit clownish, more than a healthy dollop of bisexuality, a sense of permissiveness and intimacy pervading everything about her. She's an odd set of contradictions—private yet deeply vain, happy to rattle off the statistic that 55 books had been written about her so far. Not that she had read them, mind you, but she knows that every single one of them got her wrong.

There are plenty of clips and famous co-stars—Gary Cooper, James Stewart&#8212and talk of her tempestuous personal life (Jean Gabin, possibly Ernest Hemingway). I don't mean this entirely pejoratively, but she's the very definition of a diva. At times it can be haughtily winning—she snaps at Schell as if he were a misbehaving child, and you do not want to mess with this woman. At others—particularly in the later years—it all seems unintentionally campy—how can you not laugh, for instance, at Marlene in a sequined dress and fur stole, backed by Burt Bacharach and a huge orchestra, giving her soulful rendition of Blowin' in the Wind?

Keeping the crew at arm's length means that Dietrich preserves some privacy; though we do see her last screen performance, just five years before the documentarians went to work, as she sings a wistful rendition of Just a Gigolo to a gloomy David Bowie. She doesn't want anyone to unravel the mystery, and she succeeds; instead, Schell occasionally tarts it up with some arty filmmaking, closeups of Dietrich on monitors, pictures of pictures, quick cuts and thumping music. It's like he knows his movie doesn't have an ending, his leading lady won't give him one, so his got to gin something up. It's forgivable, though, as we learn plenty about Marlene along the way. The only extra on this DVD release is a gallery of Dietrich photographs, many of the iconic, most of them appearing in the feature.