DVD Review: HOW TO BE A WOMAN

"If I'm going to be a homemaker the rest of my life, I want to know what I'm doing." - Janet, in Why Study Home Economics? 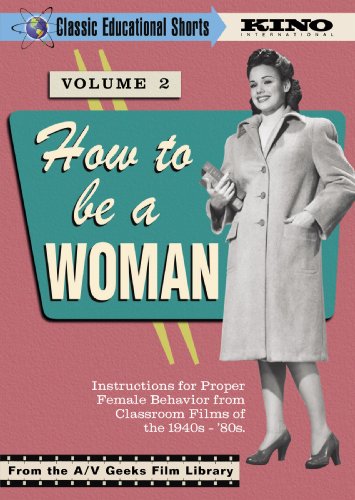 Gentle reader, you have no idea how much I look forward to learning how to be a woman.

The answer to Freud's famously naive question, "What do women want?", has many potential answers, but I can say with a high degree of confidence that the answer is not, To watch industrial films. Nevertheless, this compilation from the frighteningly extensive collection of Skip Elsheimer is kind of a wonder, bringing together five decades' worth of life lessons from safety films, fallback plans when the substitute teacher doesn't show, and low-rent corporate roadshows. You'll watch aghast at much of this; but no doubt decades on someone will be looking at, I don't know, a DVD review website, maybe, and will similarly snicker at how primitive things seemed back in the day.

Elsheimer provides a brief introduction, and notes for all the films, tooóthese are very much artifacts from another time, short movies produced to promote a particular industry or to give crudely drawn (and often horribly misguided) public health and life lessons. There are many severe haircuts, lots of hopeless fashions, and a continuing emphasis on the terrors of adolescence.

The Wonders of Reproduction, for instance, "From The Wonder World Series," doesn't talk about boys and girls, or mommies and daddies, or even the birds and the beesóoh, no, it's a look at the reproductive habits of fish, and presumably we are to draw our own lessons. What those lessons would be, from many shots of a mother fish with a mouth full of incubating eggs, I cannot be certain. Adding to the fun: Mary, the adolescent human under discussion, is compared to a calf, a chick, and a piglet.

There's as much time in the kitchen as in the bedroom, tooóin Let's Make a Sandwich, we see Sally make a profoundly unappetizing open-faced tuna rarebit, and get crucial information such as: unexpected guests love melted cheese. Not all of the films here have production credits, but this one was written and directed by Miriam Buchovóin fact, many of the names in the credits are women's, making you wonder if this was the only way they could work in a sexist industry, or if they had wholly internalized the insane lessons being preached to us.

Some of these films impart lessons for both sexes, but these are no less lunaticóImprove Your Personality, from 1968, for instance, might as well be entitled How To Be A Sociopath, for it defines "personality" as "getting what you want." Bill is taking Marie to the junior formal. You can guess what he wants. Pattern for Smartness at 18 minutes long is like the Greed of industrials, and instructs that you can snare a man by taking advice from a book and making your own clothes. ("What colors make you your most exciting self?")

Girls Are Better Than Ever, from 1967, is very Marlo Thomas, and this production of the American Dairy Association asks if physical fitness is necessary in an age of automation. The answer: Yes, and so go bowling. You're the Judge features a young Miss Bonnie Franklin, in which the boys, rather than going to the girls' party, have planned a bowling night, perhaps because they learned the lessons from the previous film too well. Bonnie teaches us that the way to snare a man is to bake a cake, parade it through the high school halls, and then challenge the boys to a bakeoff.

Worth Waiting For was produced at BYUóany guesses as to just what it is they are waiting for? This is ostensibly about two crazy high school kids who get engaged, but wait to set a dateóno doubt something else is on their minds. And Saying No, from 1982, is creepily reactionary, and not even in a Nancy Reagan sort of way, telling us that all sex leads to venereal disease, and all college girls are sluts. Continuing the menace, Attack documents that our streets are strewn with dead women on every block, and advises on how to avoid being the next Kitty Genovese. It's supposed to teach self-defense techniques, but really is a manual on how to use the contents of your purse to inflict Guantanamo-like torture.

Finally, two corporate entries: Redbook: Eighteen to Thirty-Four! is a demographic study as to why you should buy ad space; even better is The Joy of Living with Fragrance, in which the sell (for Avon) is just as hard, but we're treated to shots of the Taj Mahal, scientists in the lab, and lots of footage of lots of Betty Drapers. The only thing this lacks, actually, is an accompanying scratch 'n' sniff card.