ņOf course IĒd cry. IĒd cry bitterly. But happiness only lies in marrying the one you love.Ņ - Michiko (Michiyo Aratama) 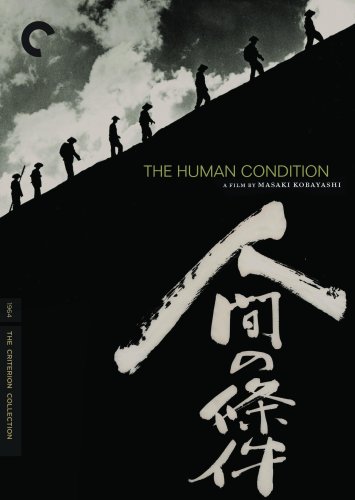 Watching, let alone, writing about a 9 1/2 hour Japanese film is a daunting task, but when that film is packaged together so nicely by The Criterion Collection, it instantly becomes a task that is a great pleasure to undertake.

Only the rarest of filmmakers have the audacity to make a 9 ? hour film. Japanese filmmaker Masaki Kobayashi is one of those directors, as evident in the release of his beyond epic masterpiece, The Human Condition. While not exactly an easy title to find on domestic home video, partly due to its 579 minute running time, itĒs now available in a wonderful four-disc set from the always-reliable Criterion Collection. An accompanying Blu-ray release would have been nice (and taken up less discs), but this is a minor gripe, as IĒm sure itĒs at least somewhere in the distributorĒs future release plans. The bottom line is that millions of film buffs everywhere will finally be able to experience this nearly-10-hour epic at their own pace and in the great fashion that only Criterion could pull off.

The filmĒs scope is so huge that Kobayashi split it into what are essentially three separate movies, The Human Condition I, The Human Condition II, and The Human Condition III. Each of those separate films are subsequently broken up into two ņPartsŅ a piece, leaving us with a total of six. What is essentially a trilogy of films begins with The Human Condition I ± Part I, where we meet Kaji (Tatsuya Nadakai), a young soldier who is about to go off to fight in World War II against his will. HeĒs actually completely against the war, and manages to avoid the front lines when the Japanese government learns of advancements heĒs made in mining productivity. They send him to a POW camp in Manchuria instead, where Kaji helps to increase ore production, and gains immunity from the draft. Some critics have complained about the overwhelming anti-war sentiment prevalent in this first part of the trilogy, but, while Kobayashi certainly doesnĒt hide his feelings on the matter, the film wouldnĒt be as effective without such strong statements. As a result, we have something that remains focused in telling a heartfelt story from beginning to end and succeeding in accomplishing the rarest of feats, it is the perfect beginning to a trilogy, yet could easily stand as a separate entity.

Things change in The Human Condition II, as Kaji is forced to leave the mine and word has gotten out that he helped the Chinese workers there, branding him as a ņRed.Ņ Koji eventually winds up in the heat of the battle, and much of this second film focuses on his relationships with his fellow soldiers. Some of the more compelling moments occur when we witness his wife, Michiko (Michiyo Aratama), coping with the knowledge that her husband has gone from being relatively safe in the mine to constantly in danger of being killed in battle. Her general reactions arenĒt exactly surprising, but theyĒre always genuine and Aratama does her best work in this film. This is arguably the most ņexcitingŅ film in the trilogy, and the battle sequences show us that Kobayashi was way ahead of his time when it comes to filming such scenes.

The Human Condition III brings the trilogy to a close by focusing on the after-effects of the battle depicted in the previous film. The first half of this film rivals The Lord of the Rings: The Two Towers in regards to the amount of screen time devoted to our main characters simply walking from one destination to another. Once we get to the last hour, though, KajiĒs saga comes to a fitting end that wonĒt exactly prove to be a satisfying one to all viewers. Therein lies the best dynamic of the entire Human Condition trilogy, as the level of satisfaction one gets from the conclusion varies from viewer to viewer. Kobayashi wraps things up quite nicely, but the audience is left to mull over all 10 hours of material and draw their own conclusions about the importance of KajiĒs life in relation to the rest of the world during such an important time in history. Kudos to this great filmmaker for having the guts to make us think a little bit even after experiencing such a lengthy masterpiece.

CriterionĒs four-disc set is another exemplary effort from them, beginning with the book-like packaging. The video transfers result in pristine, 2.35:1 anamorphic widescreen presentations culled from new 35mm prints. The overall quality is stellar for all three films, but The Human Condition III does feature slightly crisper images, likely a result of it being slightly newer than the other two features. Audio-wise, we get Dolby Digital Mono the first two films and a Dolby Digital 4.0 track for the third. The 4.0 track is, naturally, a bit more dynamic than the other two, but all three feature clear, distortion-free, and dialogue-heavy mixes. We donĒt get a ton of extras, but what we do get are reflective pieces that are well-worth your time following the films themselves. We even get trailers for each of the films, rounding out a collection that needs to be owned by anyone who considers themselves a film buff on any level.