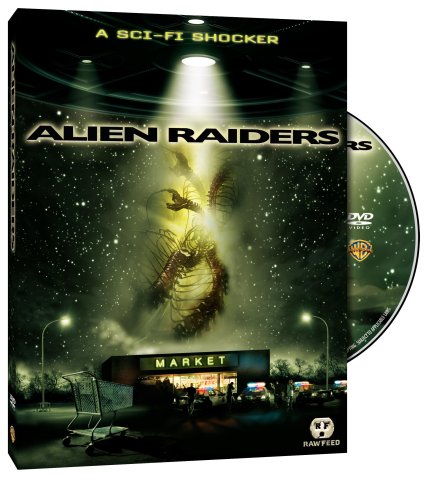 The title might make you assume the worst, but this low-budget horror trip is a solid little movie that's worth a glance.

I wasnít expecting much when I sat down to watch Alien Raiders, the latest release from the Raw Feed production company. You mightíve recognized their good name on such memorable fare as the Rest Stop films and Sublime. No? Good. But stay with me here, because if you can look past the title (which implies a steady dose of schlock and little else), this is a pretty solid monster flick. Produced on a limited budget, Alien Raiders makes up for its lack of cool creature FX with an interesting script complete with fresh concepts and characters that lend the premise some distinction, while separating it from Raw Feedís dire library of peers.

Our setting is a tiny grocery store in Buck Lake, Arizona, where a group of heavily-armed militants have taken the employees and shoppers hostage. Theyíve got an agenda but itís nothing to do with money. Instead, theyíre looking for someone. Or is it something? As the audience, weíre never told. Instead we sit and watch things play out as clueless as the gang of hostages. Of course, we are watching a movie called Alien Raiders, right?

So, thatís my problem. The filmís best surprise is spoiled by the title, the box art and by the description on the back. I donít know what a better title wouldíve been, only that I wouldíve enjoyed the surprise. You see, Alien Raiders seems to pride itself on keeping its cards close to its vest. Not just in the premise, but also in character relationships and histories. Weíre really only given glimpses of these characters but not without a sense that thereís a greater story here. Our main character has been hunting aliens for a long time, but we donít know for how long, or why. And thatís okay. Itís an approach that allows the film to move at a quick pace without being bogged down by tired exposition or padding.

Once you get past the ëspoileryí nature of the title, though, the movie can offer a nifty dose of fun. If youíve read a review of this thing, youíre probably aware of the oft-leveled comparisons to The Thing and The Mist. The Thing? Yes. The Mist? Not really. Thatís like comparing Friday the 13th and Ernest Goes to Camp just because they both take place at summer camp. There is a bit of the old ěman is the warmest place to hideî scenario in Alien Raiders, though. It helps keep things on edge by making audiences wonder where the next attack will come from, but I couldnít help but feel as though director Ben Rock never fully exploited the possibilities. We never feel the tension or suspense that was so thick in The Thing, although that may be an unfair comparison as this is an entirely different film. But that doesnít change the fact that my biggest gripe with the film is in the final fifteen minutes. If you like your shock endings telegraphed, youíre in for a real treat with this one. Try not to notice it in the first fifteen minutes.

If you can get past that, however, thereís a lot to like here. Julia Fairís screenplay manages to wrangle an original idea or two from the tired old shadows of this concept. For example, our raiders use ëseersí to find those infected with the alien virus. A ëseerí is infected with the disease, yet able to keep it at bay by injecting whichever drugs are handy. I liked the dreary nature of this particular premise, succumb to the alien substance or live life as a wacked out addict. Fun.

24 fans might get a kick out of watching Tony Almeida himself, Carlos Bernard, battle a sneaky gang of alien creatures. Bernard takes center stage as Ritter, a scientist who discovered the invasion and feels thereís no other alternative than the path heís taking. Whatís really cool about the Ritter character is that Bernard doesnít play him as an infallible badass and, instead, paints him as an anguished, cynical and desperate guy working through a pretty grim situation. Bernardís a pretty good brooder and his anti-hero is one of the best things about the film.

Iím not sure Alien Raiders is quite as impressive as it thinks it is. Like I said, itís a little obvious on one hand, even while inverting a familiar premise. The good cast and smart writing elevate the material into something Iíd confidently recommend ń if only to the most genre hungry among you. If youíre the forgiving type and can excuse some missteps along the way, than I can tell you to seek this one out. Itís a lot more competent and compelling than most of whatís rotting away on video store shelves (or your Netflix queue) these days.

Alien Raiders was shot on film, with a few minor sequences shot on digital video. The filmic aspect of this standard disc looks pretty nice, if slightly dulled (maybe Iím just spoiled by Blu-ray, though). Edges are a bit bland and disappear into shadows, while contrasting colors are strong. The image offers a satisfying degree of detail, despite my grievances. Itís a newer movie so you donít have to worry about dirt or print damage.

The disc's audio track is a 5.1 Dolby Surround mix. Most of the dialogue is center-speaker only, with the surround speakers reserved for music and the occasional action sequence. The musical score is bass-heavy and this mix helps bring the intended ambiance directly into your living room. Once the alien carnage kicks in, it will rock your walls.

At first glance, I thought Warner Bros. packed this little sleeper with some groovy extras. Unfortunately, it's nothing more than a tired assortment of promotional materials: a very brief making of (8 mins) and a shorter FX piece (just under 3 mins). We do get a few little character 'webisodes' that help flesh out some of the film's unanswered questions, but there's nothing essential here. Not unless you're really excited by the gallery of Raw Feed trailers.