ěI want it to be a work of art. Is that stupid?î - Abel (Ray Romano) 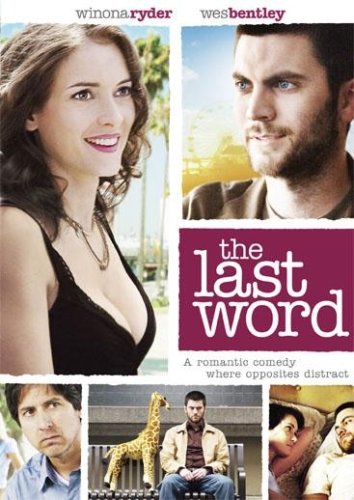 For some reason, I still look forward to seeing anything Winona Ryder is in. Actually, I think a picture like the one of her on this DVD case is reason enough.

Just when you thought Hollywood had completely run out of ideas, along comes a new one, at least on the surface. In The Last Word, Wes Bentley (American Beauty) plays Evan, a freelance writer who specializes in penning suicide notes for other people. When the film, started I was thinking about how I honestly couldnít remember another film with such a core premise; a virtual impossibility in these days of remake after remake and sequel after sequel. Abel (Ray Romano) is one of Evanís clients, and this total sad sack made the first 15 minutes or so some dark, fascinating film-watching. Then, Evan meets Charlotte (Winona Ryder), and Geoffrey Haleyís film takes a turn for the worse.

The problem lies almost solely in the introduction of the Charlotte character. Sure, Iíd watch Winona Ryder tie her shoes for two hours, as her beauty is undeniable. Sheís also an above average actress when sheís dialed into a role, but sheís not only not right for the role of Charlotte here, but the role of Charlotte is clearly not right for The Last Word. Charlotteís presence in the film completely takes all attention away from the fact that this young, quirky guy WRITES SUICIDE NOTES FOR A LIVING! There are so many possibilities as far as where such a premise can go, yet this one goes the safe route of putting our Kevorkian-esque writer in a romantic relationship with the sister of one of his recently-deceased clients. Why couldnít we explore something as obvious as the question of whether or not what Evan does is even legal, or take an in-depth look at what happens to Evan, emotionally when one of his suicide notes is actually put to use? The missed opportunities are just too glaring to overlook and totally enjoy the film in its current state.

Iíve never been a big fan of Ray Romano, and thought Everybody Loves Raymond was just another unfunny, CBS comedy (with How I Met Your Mother being the rare exception to that rule). His work in The Last Word, though, is just short of revolutionary. While his voice continues to be a bit grating, his turn as Evanís current ěclientî saves the film from being terrible, and he almost single-handedly elevates it to a level it really doesnít deserve to be on. If Haley had only focused his film entirely on the relationship between Abel and Evan and eliminated the Charlotte character altogether, we might have been talking about opening weekend box office numbers instead of its position on the DVD rental charts.

Another stumbling block is the constant tonal shift that Haley employs. A film about a man who writes suicide notes, professionally, should, at worst be a dark comedy. This movie tries to be both dark and a comedy, but never blends them together in the way that the best such films have. When comedy is attempted, it never works, often coming across as totally distasteful given the circumstances of the scene. Itís this inability to classify The Last Word that most-likely led to its lack of a theatrical release, but apparently Image Entertainment thought enough of the effort to bring it to us on DVD. Fortunately, the disc itself is one of their better recent efforts, complete with a scant few worthwhile extra features.