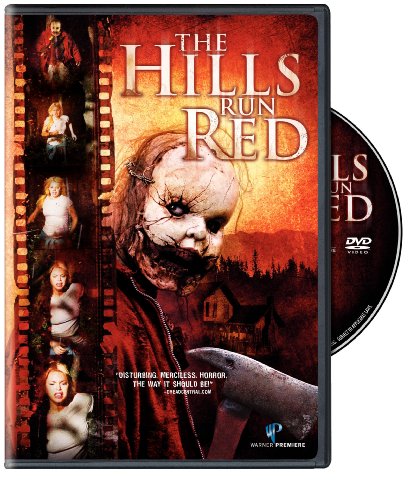 Maybe I'm just jaded, but I didn't find this overhyped horror flick to be as "shocking" or "unsettling" as suggested. That said, there's enough to appreciate to warrant a viewing.

ThereĒs a fantastic movie in The Hills Run Red, unfortunately we only get it in chunks. You see, in 1982, William Wyler Concannon made a low-budget slasher flick (also titled The Hills Run Red) that was so startling in its brutality and gore that it was pulled from theaters almost immediately. Over the years itĒs become THE elusive Holy Grail for slasher fanatics despite the fact that both the film and its director remain lost in celluloid obscurity.

Little pieces of ConcannonĒs movie-within-a-movie are strewn about The Hills Run Red and itĒs easily the best thing about the film. From the washed-out, cheapo trailer (all that exists of the fictitious slasher), to dummy posters, lobby cards and, most impressively, a faux, Italian poster, thereĒs an authenticity here that sells the premise of an old, forgotten horror flick effortlessly. ItĒs all very cool stuff, easily selling the appeal for a hardcore horror fan (which is important since itĒs the catalyst for everything that happens here). In fact, the filmmakers did such a brilliant job of creating a ļliving, breathingĒ lost film, that IĒd much rather see William Wyler ConcannonĒs mislaid movie instead of the sloppy effort we ended up getting with the real deal.

Anyway, if youĒre any sort of horror fan, youĒll have no problem understanding why Tyler (Tad Hilgenbrink) has become consumed with ConcannonĒs movie. Somehow, he receives a tip that the missing filmmakerĒs daughter is stripping at a nearby club, so he treks out there to have a chat with her. Alexa Concannon (Sophie Monk) has fallen on hard times, it seems, snorting coke and doing heroin at her every convenience. Reluctantly, she agrees to take Tyler (along with his best friend and girlfriend) back to the spot where The Hills Run Red was shot (after an utterly baffling detoxing sequence, that is) ± only things do not go according to plan.

You see, the resident slasher on the loose is Babyface, a severely disfigured mountain man with a baby mask affixed to his head via barbed wire. He stalks our unwelcome trespassers as they continue their trek to the directorĒs house but this is a tiny part of the film. Babyface doesnĒt show up until well over the halfway point and his killing spree is largely relegated to one extended stalking sequence. ItĒs one of many missed opportunities plaguing this one, since director Dave Parker doesnĒt bother with tension of suspense. Instead, our killer shows up, murders a large chunk of people all at once before the film rushes headfirst into its final act (and a series to twists that youĒll see coming from the very beginning).

I donĒt think IĒm spoiling anything by revealing that the survivors do get to meet Mr. Concannon (the great William Sadler in a role thatĒs much too small). The only problem is, like everything else, it feels incredibly rushed. Clocking in at 76 minutes without credits, IĒm not sure why The Hills Run Red is in such a rush to tell its story. According to the filmmakers, Warner Bros. did excise about ten minutes of story beats from the film, which could very well explain the somewhat disjointed nature of the piece. The story does deal with some amazingly disturbing themes: incest, child rape, brutal murder ± this oneĒs got it all, folks! ItĒs largely muted, though, going largely unexplored. Nothing beyond a few murder sequences are all that graphic (and those are largely destroyed by distracting CGI). The film never goes as far as it wants to and the end result is an unsatisfying mixture of good and bad elements that largely work against each other. ThereĒs too much good on display to dismiss it, but almost everything couldĒve been handled better.

The script (by genre staple David J. Schow and John Dombrow) earns high marks for creating genuinely believable characters, warts and all. For example, TylerĒs girlfriend (Janet Montgomery) treks along with her boyfriend despite having slept with his best friend the night before. I spent a good portion of the film wondering why sheĒd bother to go along on the trip until I realized she was more than likely interested in being with the best friend at this point. High marks for some fairly complex character stuff here. This is a slasher movie, after all and most filmmakers donĒt bother to make us give two shits about fodder.

Unfortunately, elements of the story needed further fleshing to completely hit their mark. For example, the dynamic between the Concannon father and daughter is one of the most important aspects to THRRĒs final act and yet, itĒs barely touched on. I canĒt divulge any more details without spoiling the story, but letĒs call it underwhelming and leave it at that. But even amidst this weakness, there are things to enjoy. The filmmakers have fashioned one of the plot twists as a funny juxtaposition between the slasher flicks of the 80s and the modern, significantly less fun, wave of ļtorture pornĒ movies. Even when THRR falls a bit short of the finish, the effort on display as admirable.

So if The Hills Run Red is never as clever or smart as it thinks it is, at least itĒs got something to say about the current state of the horror genre. Best of all? It does so without the none-too-subtle ļnudge nudge, wink winkĒ of the Scream films. ItĒs a nasty little effort, complete with copious amounts of female nudity (nice to see actresses bare it all in this age of non-exploitative, exploitation flicks) and violence. It boasts a nifty, if underused, killer and a fun turn by William Sadler to keep you trudging through the spots where the bulb doesnĒt burn so bright.

VIDEO:
Warner opted to sent THRR direct-to-DVD (and yet, releasing