"Next time Jim, call before you drop by." - Jerry Blake (Terry O'Quinn) 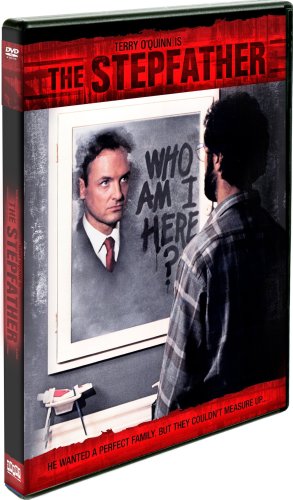 This one's a lot more than just another 80s slasher movie.

Jerry Blake (Terry OĒ Quinn) is your average, ordinary family man whose ideas have been cribbed directly from the all-American television sitcoms of the 1950s ± think Father Knows Best and youĒve got a pretty good idea of where this guy gets his cues. The only difference is that the second family life deviates from the romanticized ideal, Jerry murders his family, changes is appearance and plans another life somewhere else.

In fact, Jerry Blake isnĒt even his real name; itĒs his latest moniker. Jerry has relocated to a small suburb and married Susan Maine (Shelly Hack). Life together couldnĒt be any better until his stepdaughter, Stephanie (Jill Schoelen), begins to suspect that all isnĒt right with Jerry Blake. He tries to circumvent the girlĒs suspicions by killing anybody that stands between him and a ļnormalĒ life, but the fa┴ade soon proves too difficult to maintain and soon Jerry realizes that it might just be time to start moving onų

The Stepfather is an incredibly simple film. Its premise doesnĒt reinvent the wheel and youĒve probably got a pretty good idea as to where this will all end up. The difference, though, is that itĒs very well-acted and directed. Director Joseph Rubin (who would go on to repeat this formula in several, lesser films such as Sleeping With the Enemy and The Good Son) knows how to stage tension and suspense and he milks it for all its worth. One of the most impressive moments here is when a suspicious psychologist takes an appointment with Blake (posing as a realtor) in an attempt to learn more about him. ItĒs a psychological game of cat and mouse that steadily builds to a vicious payoff.

I was only a child of eight years old when this played in theaters, but I recall the steadily building hype like it was yesterday. Anyone whoĒd managed to see this one raved about it and while Anthony Hopkins got endless accolades (and an Oscar win) for his turn as the deranged Hannibal Lecter, I canĒt help but fell that Terry OĒ Quinn was robbed of one for his portrayal here. This guy is so unhinged that itĒs impossible not to be on edge while watching. HeĒs menacing and psychotic without ever being a cartoon (even when he freaks out) and the power in his performance really makes this film a memorable one.

It was easy to overlook The Stepfather as being just another slasher movie at the time of its release (and the string of sequels probably didnĒt help the stigma, IĒm guessing), but these days itĒs a lost classic begging for rediscovery. This was back in the day when Hollywood didnĒt feel the need to over explain everything (we never learn the StepfatherĒs real name or background, thankfully) which helped make this a lean and mean little thriller. With the unnecessary remake coming out soon, itĒs important to take the original for a spin before watching the updated version. IĒm not going to prejudge something I havenĒt seen, but one thingĒs for sure: no matter how good it is or isnĒt, the new movie doesnĒt have Terry OĒ Quinn, and that makes it futile. At least in my mind.

IMAGE:
Shout Factory have finally given us an official, region 1 release of The Stepfather and IĒm happy to report that it looks great! Presented in its original aspect ratio of 1.85:1, the transfer only shows its age in a few, select moments of dirt specs. The rest of this is pretty stellar with strong contrast and rich blacks (surprising for standard DVD). ShoutĒs DVD is also packing a fairly sharp picture, with sharp edges that lend a nice ņpoppingŅ factor to the transfer. This one mightĒve taken forever to get to DVD, but it was well worth the wait.

AUDIO:
The 2.0 Dolby Digital track offers clear dialogue and music, even if it doesnĒt shake your walls. That said, thereĒ s nothing wrong with this one.

EXTRAS:
While I was hoping to see Terry OĒQuinn on this disc, Shout Factory have provided us with a nice little package of supplements. First off is an audio commentary by director Joseph Rubin and moderator Michael Gingold (of Fangoria magazine). ItĒs a good discussion, loaded with interesting tidbits covering the filmĒs production and genesis. ThereĒs a little repetition when placed alongside the ļmaking-ofĒ feature, but itĒs a satisfying commentary track for those of you who want to learn more.

The ļmaking-ofĒ runs just shy of thirty minutes, featuring interviews with director Joseph Rubin, writer Brian Garfield and other, varied members of the production. Thankfully, 80s screen queen goddess, Jill Schoelen, is also on hand to get her two cents in on the thing. ItĒs well produced and quite enjoyable, despite the aforementioned lack of OĒQuinn.

A theatrical trailer rounds out the package.

CONCLUSION:
A real classic. Finally on DVD. Buy it.