Kino's Ballast DVD and Blu-ray editions will feature a 37-minute exclusive video extra titled "Scene Development" offering a view into the two-month improvisational rehearsal process employed by actors Micheal J. Smith, Sr., JimMyron Ross, Tarra Riggs, and director, Hammer, that generated what Los Angeles Times critic, Kenneth Turan, described as "a sense of place, a feeling for reality so compelling that it makes us feel like we're living it, not just watching on a screen."

New York, NY - September 17, 2009 - Kino International, whose catalogue carries some of the most innovative and respected American independent films of recent years, including Kelly Reichardt's Old Joy (2006), So Yong Kim's In Between Days (2006) and Azazel Jacobs' Momma's Man (2008), is proud to announce the release of one of the most critically acclaimed films of 2008 on Blu-ray and standard DVD: Lance Hammer's Ballast 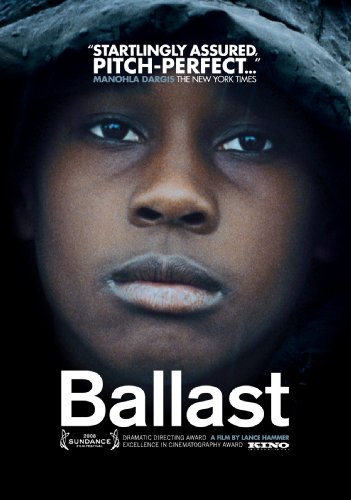 Winner of two major awards for Best Directing and Best Cinematography at the Sundance Film Festival in 2008 and numerous international prizes, Ballast

In the cold winter light of the Mississippi Delta, three lonely people stumble under the weight of a shared tragedy. Lawrence (Micheal J. Smith, Sr.) is paralyzed with grief after the loss of his twin brother. Twelve-year-old James (JimMyron Ross) drifts into the perilous orbit of local teenagers while his single mother Marlee (Tarra Riggs) is too exhausted from her menial job to interpret the clues.

When sudden violence forces mother and son to flee their home in the night, they alight desperately on Lawrence's property. Though this provides safe harbor, it rekindles the fury of a bitter, long-standing conflict.

Writer-director Lance Hammer and his gifted cast of non-professional actors have created an unflinching and profoundly humane story of lost souls forced by circumstance to seek solace in the most unlikely of places.This "highly sophisticated film" (Amy Taubin, ArtForum) is also a thought-provoking examination of the effects of poverty and economic disparity on the lives of regular Americans - and as such, stands as one of the few must-see works for our times.

* Ballast Scene Development, a 37-minute making-of feature charting the evolution of several scenes through the improvisational conflict sessions and two-month rehearsal process that gave form to the final film. Immediately after each rehearsal scene, we see the actual footage from the film, showcasing the end result of their vibrant collaborative work.