ěThis is a little embarrassing, but, I kind of forgot your name.î - Micah (Wyatt Cenac) 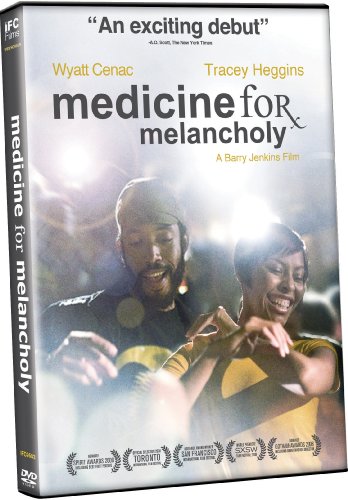 This one's been on my radar for some time now, if only to see how Daily Show correspondent Wyatt Cenac handles serious acting.

Comedy Centralís The Daily Show has seen a handful of its alumni leave the show and go on to pursue big-time TV or movie careers, with varying degrees of success. The latest Daily Show correspondent to go such a route is relative newcomer Wyatt Cenac. Heís a subtle, quiet comedian, bringing a nice infusion of youth and man-on-the-street ways to Jon Stewartís show. He lands his first starring role in the 2008 indie film, Medicine for Melancholy, and more than holds his own, powering this subtle, powerful film along with costar Tracey Heggins. This could be the beginning of a fine film career for Mr. Cenac.

Jo (Tracey Heggins) and Micah (Wyatt Cenac) have just awoken from a drunken one-night-stand. Their awakening is an extended awkward silence, as they go about retrieving their clothes, brushing their teeth, and finding their way out of the scene of the crime as soon as they can. Micah isnít satisfied with this being a one-night fling, though, and he does all he can to keep Jo company for the day. At first reluctant and wanting Micah to disappear, Jo eventually succumbs to his charms and the two spend the day together, musing about race, politics, and love.

This is a very quiet film that speaks ever so loudly with music and mood throughout. There are plenty of scenes with deep, engaging, and almost always sweet conversations between Jo and Micah, but this necessary exposition is surrounded by beautiful sequences of dialogue-free imagery that grabs us and never lets go. The best of these sequences is also the longest, and takes place in a downtown club near the end of the film. Not only does this extended sequence act as a musical dream come true for indie rock buffs like myself, but serves as the perfect emotional conclusion for this relationship that has been evolving all day.

The performances are stellar, with Heggins bringing the perfect blend of beauty and smarts to the table, and Cenac giving the film a comedic, yet touching presence as well. The power of both of their performances explodes off the screen during a final, drunken conversation in the middle of the street. Cenac brings an incredible amount of believability to his musings on Joís indie tendencies and how that relates to her race. Of course, Jo doesnít take to kindly to these generalizations given her current relationship situation, but this fight is at first harrowing, yet it eventually yields a surprising finale that is at first pleasant, for the audience, even though it is simply delaying the inevitable for these two new lovers.

If youíre looking for a film completely devoid of political undertones and/or discussions involving race and overall problems with society, then youíre in the wrong place. However, writer/director Barry Jenkins, refrains from getting even remotely preachy on any of these subjects, allowing them to be pivotal parts of the film and keys to its effectiveness. While the discussions are centered on San Francisco and the Bay Area, you could easily insert any other big city in the U.S. into these conversations and they would fit perfectly. Still, at its core, Jenkinsí film is a classic love story; albeit one that eschews pretty much every Hollywood convention you can think of. That reason, alone, is enough to recommend Medicine for Melancholy to the masses. Thanks to IFCís solid new DVD release, getting the film out there has now become a reality.