DVD Review: ACROSS THE HALL 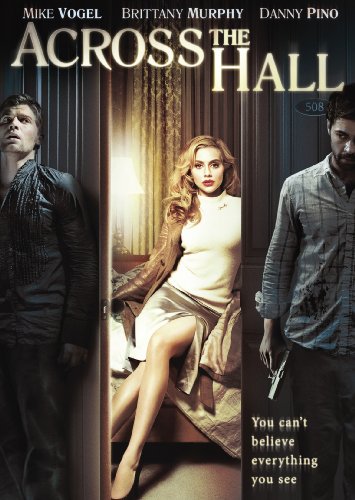 I've heard decent rumblings about this potentially twisty thriller, and the presence of Brittany Murphy doesn't exactly hurt its cause.

My screener copy of Across the Hall arrived more than a month prior to star Brittany MurphyĒs shocking and untimely death at the too-young age of 32. While it is truly sad to lose someone so young, it proved beneficial that I waited to give this film a look until after her passing. The DVD packaging, and my research on the film screamed of a standard, by-the-numbers thriller. But, given MurphyĒs presence in the film, it carried a much different dynamic than if I had watched it before this tragedy occurred. Just a warning, though, there are moments during Across the Hall, involving Murphy that might be a bit too disturbing to watch so soon after her death. Film experience-wise, these scenes add to the storyĒs impact, but in at the high cost of serving as a reminder of her sad recent death.

One never truly knows what happens in the closed confines of a hotel room. WeĒre given a rare glimpse at the happenings inside two of them, as Terry (Danny Pino) has holed himself up in a room across the hall from another room where he suspects his fianc╚e, June (Murphy), of having an affair. Terry calls his best friend, Julian (Mike Vogel) hinting of murderous intentions. Julian quickly heads to TerryĒs room in an attempt to talk him out of using the gun heĒs loaded, and it isnĒt long before the game totally changes and deeper, darker secrets are revealed.

It becomes abundantly clear, once the credits finished rolling, that this is one of those flicks that, by the halfway point, youĒre praying it resolves its ultra-twisty plot in a satisfying way. ItĒs one of those go-for-broke plots where the movie simply has no redeeming value whatsoever if the end isnĒt tidy and engaging. In this case, a whole lot of nothing happens for the first hour and fifteen minutes. Instead of action and suspense, we get a lot of pacing in hotel rooms, slow walking amongst the hall, and seemingly-endless cell phone conversations. Yes, this is yet another modern cinematic thriller that uses a cell phoneĒs ringtone as a means to tip off a pursuer. Seriously, has any screenwriter been made aware of a cell phoneĒs ņSilentŅ feature?! By the time we reach the ending weĒre just ready for something, anything to happen.

Fortunately, that ņsomething,Ņ that ņanythingŅ is worth the wait, as the finale overcomes a ridiculously predictable twist at the one-hour mark. All signs during the first hour point to this plot development, but, after shaking your head and screaming ņI knew it!Ņ over and over again, you can rest assured that the last fifteen minutes will be interesting to say the least. ItĒs actually quite clever the way director Alex Merkin closes his film, leaving very few unanswered questions, and making the final twist totally plausible and fulfilling. This is far more compelling stuff than most of these direct-to-DVD thrillers deliver, and hereĒs hoping that MurphyĒs presence, despite the circumstances, delivers a wider audience than Across the Hall would have normally garnered.

The acting is mostly hit-or-miss, with the two male leads doing their fair share of overacting at times, but they do have their moments and keep their dynamic characters believable. Still, most of the curiosity will lie in Brittany MurphyĒs performance, and, sadly, she isnĒt asked to do much. Her character is an integral part of the story, but this is clearly Vogel and PinoĒs movie. During her limited screen time, Murphy does a fine job with what sheĒs given to do, elevating Across the Hall to more than simply a curiosity. Image EntertainmentĒs disc is a fine effort, with solid audio and video transfers, and a nice featurette-filled extras collection to boot.