DVD Review: LAST OF THE LIVING 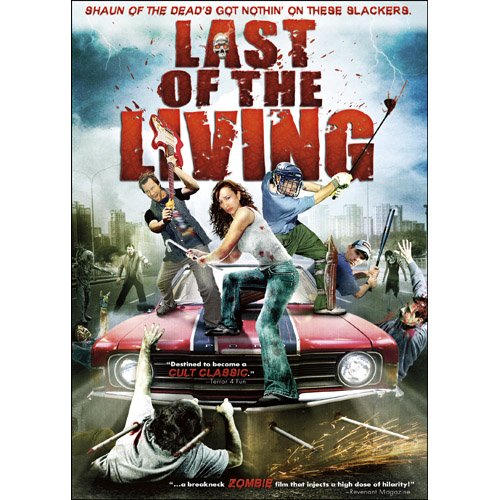 The number of zombie movies continues to multiply exponentially, and this latest one looks a little shady at best.

The sudden burst in popularity of zombie movies seems as unstoppable asųwellųa wild pack of zombies. Lately, it seems that the modern brand of zombie film leans more on the self-referential, humorous side, than the all-out horror first experienced way back in the original Night of the Living Dead. The benchmark for these humorous zombie flicks is Shaun of the Dead, but 2009 brought us the major box office success that was Zombieland, a sort of Hollywood answer to Edgar WrightĒs modern masterpiece. Now, Echo Bridge Home Entertainment springs an unknown, independent film that strives to be New ZealandĒs answer to Shaun, the direct- to-DVD Last of the Living. In no way does this extremely low budget effort come close to generating similar, zombierific laughs, but it does have good intentions, and is worth the 90 minutes it asks of us.

Ash (Ashleigh Southam), Morgan (Morgan Williams), and Johnny (Robert Faith) are three friends who go about their day like most single guys in their early twenties. They sit in their apartment watching TV, thinking about girls, and, oh yeah, fighting zombies. ItĒs been months since the zombie apocalypse, and these guys have learned a thing or two about defending themselves from these flesh eating, former humans. One day, they run into the beautiful Stef (Emily Paddon-Brown), who just happens to be a scientist thatĒs developed a serum to change zombies back into normal human beings. So, the guys do all they can to help Stef get the serum out of a zombie-ridden hospital and onto an island for mass distribution.

Writer/Producer/Director/Editor Logan McMillanĒs film more than wears its low budget on its sleeve, which in this case tends to work against it. Reportedly made for $5,000, the gore and special effects are as bargain basement as it gets, and, when put up against the big budget zombie efforts out there en mass, Last of the Living simply pales in comparison. The budget obviously got in the way of hiring even adequate acting talent, as everyone involved (except Ms. Paddon-Brown) needs at least some form of acting lesson. All three of the main male actors are supposed to be playing characters who arenĒt exactly the smartest zombie killers in existence, but these guys go a bit too far to make them even dumber than they should be. IĒm all for zany characters making tongue-in-cheek jokes throughout a zombie movie (see the entire cast of Zombieland for how such characters should be performed), but these three actors will test even the most open-minded audienceĒs patience.

Still, despite the annoying acting and tough to stomach special effects, Last of the Living is still fun. While most of the story is played for laughs, weĒre still dealing with a world thatĒs been overrun by the undead. This generates an overall sense of dread that is extremely interesting, as we never know what creature lurks around each and every corner, ready to munch on any and all of our protagonistsĒ body parts, generating a tight suspense, intentional or not. ItĒs that sense of dread that will always make zombie films intriguing, regardless of their other elements, and, at worst, itĒs what made Last of the Living at least marginally enjoyable. Echo BridgeĒs DVD isnĒt much to write home about, with the audio and video being adequate given the source material, and a couple of throwaway extras that donĒt add much to the overall package.