"Americans like to holiday in their own country, which suits the rest of the world just fine." - Tom Baker 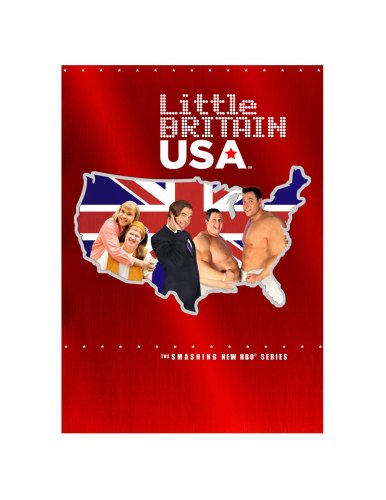 The wildly rude humor of Little Britain makes its way to the USA. Not much is lost in translation, as no one is safe from their skewers.

One of the more entertaining imports from the UK in recent years is the series Little Britain, which features Matt Lucas and David Walliams as a multitude of characters, many of them recurring, who send up various types in Britain, as a mad microcosm of the nation. Jumping the Atlantic to HBO, the series maintains the same attitude of sociological examination, but transplants many of the same characters into America, to see how they interact with the natives. The cross-cultural anthropological study gimmick works well, with quite a bit of foul language, sexual content and extreme rudeness for good measure.

Many of the favorites from the BBC version are back here, starting with Carol Beer, of the catchphrase, "Computer says no", this time working in a hospital, where she gets to give a sample of her rudeness and petty sense of power over others. Juvenile delinquent Vicky Pollard has to deal with a boot camp in Utah, while Sebastian is now himself Prime Minister, lusting after the American President. Pushed a bit into the background, but still present, is Dafydd Thomas, who continues to insist he's the only gay at college. Marjorie Dawes brings her fat-busting magic to America where her viciousness is given free rein, starting with a brutally nasty and hilarious segment with Rosie O'Donnell.

There are some entertaining American characters too, most notably Bing Gordyn, the "eighth man on the moon" pathetically dwelling in the past, and Bubble Devere, who is frequently shocking in her grotesque nudity (guest star Robert Vaughn gamely plays along with the joke). An American family is shocked by their visiting English cousins and their adult son who continues to breast-feed. One of the funniest segments features mad Phyllis Church, as she talks to her pet, Mr. Doggy, and he talks back, insisting that she publicly commit a variety of obscene or criminal acts to placate him. It's pretty wild and allows some unrestrained id activity.

On the whole, the program survives the transition across the seas very well, and doesn't really require any familiarity with the original, though that does add another layer of humor by seeing these familiar creatures in unusual situations.

Lucas and Walliams offer commentaries on each episode, which include a little additional comedy in character, but it generally provides background about the characters and how they have developed. It's pretty much for serious fans, but there's some valuable information here. The anamorphic widescreen 1.78:1 picture looks great, with plenty of detail and no damage at all. There's also a short (12m) "Making of" that's really more in the EPK category. Unfortunately, there's no "Play All" button.