ņMy mother phoned. How did she know I was here?Ņ - Anna Silver (Aurore Clement) - Les Rendez-vous 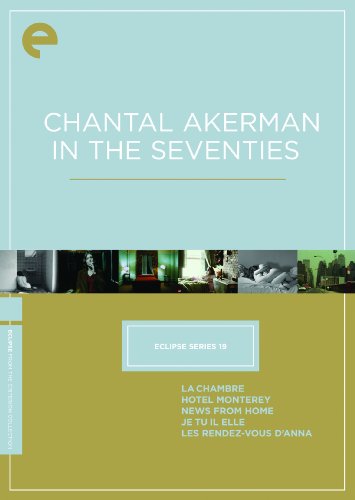 While she's responsible for some of the best foreign films of our time, this collection of works from the 1970's exposes us to Chantal Akerman's hidden treasures.

Belgian director Chantal Akerman is perhaps best known for Jeanne Dielman, 23 Quai du Commerce, 1080 Bruxelles, her 1975 film that changed the face of experimental feminist cinema. Before she made that film, though, she embarked on a journey that resulted in the films collected in The Criterion CollectionĒs box set, Chantal Akerman in the Seventies. This set is an exploration of a directorĒs career that we rarely see, as itĒs clear as these films progress, that Akerman goes from a nearly out-of-her league beginner, to a polished professional that not only has strong ideas before she reached her pinnacle (Jeanne Dielman), but continues to flourish 35 years later. Criterion gives us five of AkermanĒs films spanning the years leading up to and directly after Jeanne Dielman, and delivers them spread out over three discs.

Disc 1 begins with La Chambre, an 11-minute short film from 1972 that finds Akerman starring as herself. There isnĒt much to this film, story wise; in fact, there really isnĒt a story at all. Instead, we see Akerman in her apartment, as the camera swoops around, allowing us to witness what sheĒs doing each time it passes her. The next film, Hotel Monterey, also from 1972, is essentially an extension of La Chambre. At 62 minutes in length, this film also asks its audience to simply follow the camera through the halls of the titular building. For most of us, watching a camera travel through a building for over an hour isnĒt exactly riveting stuff, but thereĒs quite a bit of beauty in the way the camera flows and the images it captures.

The last entry on this disc is also the first of the setĒs full-length films. 1976Ēs News From Home also features similar, breathtaking images, but this time we also hear Akerman reading letters that her mother wrote to her when she first left Belgium. ItĒs the reading of these letters that really grip us and take this film to another level, as Akerman wonderfully blends her motherĒs often scolding words with scenery that show us the directorĒs belief that sheĒs made the right decision in moving to her new home, despite her motherĒs feelings.

Disc 2 contains the setĒs first pure fiction feature-length film, 1975Ēs Je Tu Il Elle (Me You He She). Clocking in at nearly 90 minutes, this black-and-white movie is broken up into three acts, the first of which focuses on a woman named Julie (Akerman, herself), who locks herself in an apartment and, among other things, pens a letter to an ex- lover. Act Two is where things get interesting, as Julie leaves her apartment and spontaneously jumps in a truck with a stranger (Niels Arestrup). Akerman uses a series of long shots here to project JulieĒs obsession with this man, and her continued display of unique camera work, really takes this film to another level in this act. Act Three finds Julie at her friendĒs (Claire Wauthion) apartment, where we the dynamics of their relationship unfold in front of us. This third act brings AkermanĒs film full-circle, showing us JulieĒs romantic feelings towards both men and women, in a direct-enough way that leaves the overlying plot details (the identity of the addressee of the letter sheĒs writing) ambiguous enough to totally engross the audience in the proceedings.

Disc 3 houses another feature, Les Rendez-vous DĒAnna, a 2-hour, 1978 film that was clearly influenced by Jeanne Dielman. ItĒs another semi-autobiographical piece that involves a prominent director named Anna Silver (Aurore Clement) who travels to Germany to screen her latest movie. Once there, she receives a message from her mother (Lea Massari) which contains subject matter strikingly similar to that in the letters that we hear Akerman read in News From Home. The rest of this excellent film (the best in the set, although theyĒre all good) consists of Anna meeting a wide variety of people, including a stranger on a train (Hanns Zischler), an old family friend (Magali No╬l), and an ex-lover (Jean-Pierre Cassel). This is an extremely personal film for Akerman, and full of ironic encounters, as itĒs a near-perfect study of how creativity isnĒt always a trait that translates into social happiness or even acceptance. The audio and video quality on all of the films in this set varies from movie-to- movie, but, overall itĒs quite impressive as little to no restoration was performed on any of the source material. Also, as is the case with all of CriterionĒs Eclipse Series, there are no extra features on any of the discs.