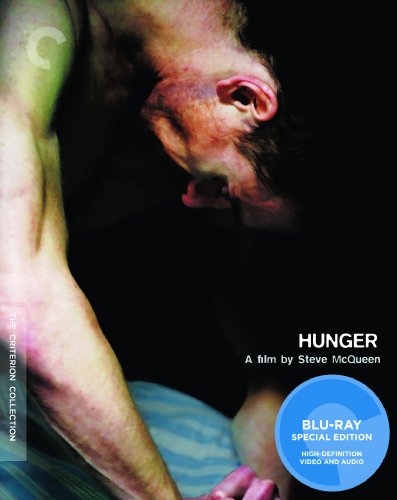 Having cought this disturbing masterpiece nearly a year ago, I can't wait to see what a wonderful treatment The Criterion Collection has granted it on Blu-ray.

One of the best actors working today that youĒve probably never heard of is Michael Fassbender. Despite his not having a household name, he has an extremely recognizable face, thanks to recent work in 300, the stellar, little-seen Eden Lake, and Quentin TarantinoĒs Inglorious Basterds, to name a few. FassbenderĒs also in the currently-in-theaters Fish Tank and upcoming summer flick Jonah Hex, and if he is, indeed, well-known in Hollywood by this time next year, his success could very likely be traced back to his best performance to date, in 2008Ēs Hunger. This dark, harrowing, difficult to watch (in a good way) debut feature from British filmmaker Steve McQueen (no relation to the Hollywood legend), chronicles the true story of, among other things, the last six weeks in the life of Bobby Sands, an IRA activist who led the infamous hunger strike in a 1981 British prison. After barely getting a theatrical release, this incredible film featuring FassbenderĒs remarkable performance as Sands gets the royal treatment it deserves on Blu ray, courtesy of the wonder that is The Criterion Collection.

In 1981 Great Britain, it was a constant struggle for members of the Irish Republican Army (IRA) imprisoned in the Maze Prison, to be recognized and granted rights as political prisoners. The life of a prison guard wasnĒt one of luxury either, and when they werenĒt busy keeping prisoners in order, they were checking under their cars in front of their own houses for bombs that had been planted by free IRA members and supporters. Once, and if the guards safely made it to the prison they were responsible for handling these IRA prisoners, one of which was Bobby Sands (Fassbender). He is the leader of these men, who, after years of being strong-armed by the British government, realize that the only way their demands will be met is if they organize a hunger strike. They realize that such drastic measures will lead to a decrease in their numbers, but if they eventually reach an agreement with Margaret Thatcher and company, it will be a worthwhile sacrifice.

McQueen has structured Hunger in a very unique way, not introducing us to Bobby Sands for over a half hour, and instead focusing on one of the prison guards, played by Stuart Graham. The film opens with the guard seemingly going about a typical morning, preparing for work, leaving the house, and, oh yeah, making sure he isnĒt blown-up along with his car. Focusing on the oppressors instead of the IRA prisoners right off the bat is a risky move for McQueen. However, itĒs a move that pays off immensely, as the audience is taken on an emotional rollercoaster once we see what happens to GrahamĒs guard, and then, eventually, get a first-hand look at SandsĒ gut-wrenching, physical deterioration.

***Skip the next paragraph if youĒre unaware of the Bobby Sands story and want to be surprised by the filmĒs second half.***

The latter brings us to the beyond-words type of work that Michael Fassbender does to give us as realistic an account as any human could possibly convey of someone dying of starvation. If you think youĒd seen it all when Christian Bale played the emaciated lead character in The Machinist, Fassbender takes such extreme role preparation to another level. As SandsĒ hunger strike continues, he becomes increasingly malnourished and skinny, and during his final days, appears to be simply a skeleton, clinging to life using only sheer will and determination. Fassbender doesnĒt rely on visual effects to capture SandsĒ physical deterioration, instead becoming disgustingly thin, himself, making us believe that it is him that is on the verge of death, and not simply his character. Sure, DeNiro drastically changed his appearance for Raging Bull and numerous actors have done similar preparation for a role, but very few have seemingly starved themselves, and put their own life in jeopardy for the sake of realism. Fassbender is one of these few, making the audience truly fear for his life as well as that of Bobby Sands.

This is a virtually flawless film told in a unique manner, in that the first part focuses on GrahamĒs guard and the last part is all Bobby Sands. What really makes the film stand out is another risky decision by McQueen. This comes in the form of a 17-minute, plus sequence in the middle of the film that is, basically, a sit-down conversation between Sands and a priest (Liam Cunningham). On paper, including this static, single-shot scene right in the middle of an intense historical drama about IRA prisoners sounds like career suicide, but, again, McQueen does it to perfection. Not only is the subdued conversation riveting, but the way McQueen frames the shot, incorporates natural light, and stylizes cigarette smoke, results in one of the most artistic sequences IĒve seen in quite some time.

The Criterion CollectionĒs Blu-ray release is just as impressive as the film itself, sporting a visual presentation that excels due to it being a new, high-definition digital transfer, approved by McQueen himself. A lossless, DTS-HD Master Audio track springs to life when necessary, but is always natural and free of defects. Aside from another excellent Criterion booklet, we get video interviews with McQueen and Fassbender, a documentary on the making of the film, and the excellent ņThe ProvosĒ Last Card?.Ņ This is a 1981 episode of the BBC show Panorama, and it gives an in-depth account of the Maze Prison hunger strikes and their subsequent political and societal ramifications. Any fan of inventive, original filmmaking owes it to themselves to pick up this Blu-ray disc immediately!