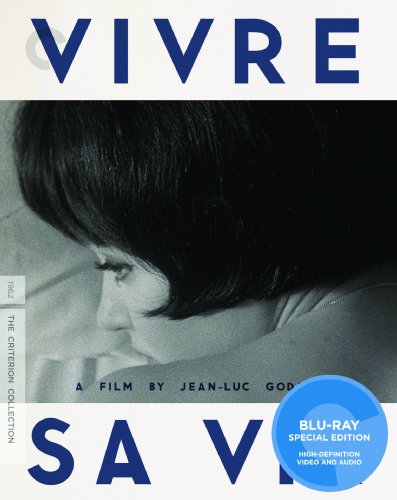 Another of Godard's materworks, this particular film is a wonderful showcase of Anna Karina's unforgettble acting talents...that Criterion's offering this Blu-ray version is an added bonus.

Ah, the eternal breath of fresh cinematic air that is Jean-Luc Godard. The 79-year-old masterful French auteur is responsible for some of the most memorable, yet challenging foreign films of the 21st century, and is on the verge of premiering his latest, Socialisme, at this yearĒs Cannes Film Festival next month. One of his most heralded films, 1962Ēs Vivre Sa Vie, was a showcase for his then-wife, the gorgeous Anna Karina. While full of many of the trademark flourishes that made Godard the filmmaking legend that he is, Vivre Sa Vie would arguably be less effective without the electricity that Karina brings to the lead role of Nana. This is the latest of GodardĒs films to get the royal, Criterion Collection treatment, and this Blu-ray release is one of their best to date in 2010.

GodardĒs tale is told in 12 separate ņtableaux,Ņ or chapters that are loosely interrelated to each other, yet feature many of the same characters throughout. Karina plays Nana, an aspiring actress who can seemingly never receive the recognition she needs to make it big in the industry. Her frustration leads her to another career path, prostitution. Each of the ņtableauxŅ is a separate, stand-alone tale, but they also gradually get us from Point A to Point B in the total progression of this period in NanaĒs life. This period is not only a total self-discovery, but it also leads her down a dangerous path that only she can steer her way away from.

WeĒve seen many cases throughout cinematic history of a director adoring his lead actress via his camera, but Godard takes such a practice to another level here. Karina is deserving of such adoration, though, and Godard is often a step away from actually letting his camera touch her. She brings such a natural, genuine presence to the film, that one could hardly blame Godard for showing such affection towards her with his lens, and the depth and grace of her actual acting performance takes things to another level entirely. Karina embodies Nana in a way that instantly sucks the viewer in to caring deeply for her and her plight. Once the last of the ņtableauxŅ is complete weĒre left struggling to cope with our feelings about whatĒs just happened, and we owe such raw emotion to Karina, albeit with at least a little help from Godard along the way.

GodardĒs style here (and, arguably, in many of his classic films) is challenging for the average filmgoer, to say the least. For starters the ņtableauxŅ format is a risk, to say the least, in that heĒs asking his audience to essentially keep things separate, yet follow the trials and tribulations of a single character across the set pieces. However, those more seasoned veterans of Godard will have no problem staying in tune with NanaĒs tales, via some standard filmmaking techniques that subtly open some windows into what weĒll see as the ņtableauxŅ progress in Vivre Sa Vie. One such technique is GodardĒs unique framing, as heĒs shot each tale in different ways, going so far as to point his camera so as to focus entirely on Nana and block out the person she is sitting directly next to and conversing with. ItĒs simple, yet precise and methodical choices like this that set the tone for this masterpiece of a film.

Fortunately, for Godard fans, The Criterion Collection more than has his back. To date, the company has distributed 11 of his films on DVD and a pair on Blu-ray, including Vivre Sa Vie. All signs point to the other 9 of GodardĒs DVD-only titles making their way to Blu very soon, and when they do, fans will be beyond happy if they even slightly compare to this release. Vivre Sa Vie has simply never looked better, thanks to an awesome new 1080p transfer that allows for excellent contrast, lush blacks and whites, and the elimination of virtually all of the defects that marred previous home video releases of the film. The LPCM audio is nice and clean, and the remarkable extras collection includes a commentary track with film scholar Adrian Martin, a detailed deconstruction of the film by French scholar Jean Narboni, and a look at GodardĒs inspiration for his phenomenal character study.