"You can't break out of prison and into society in the same week." - The Ringo Kid (John Wayne) 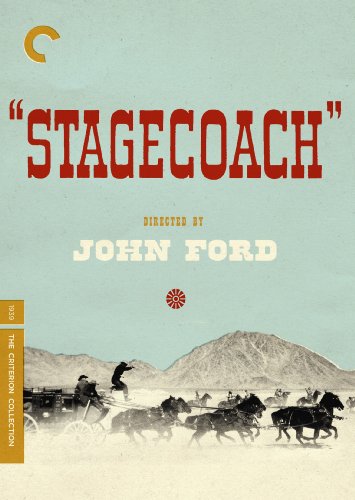 One of the great ones, the first John Wayne/John Ford collaboration gets the top-of-the-line Criterion treatment.

Can you say enough good things about Stagecoach? Read on and find out, cowboy.

This isn't the first Western, and it may not even be your favorite&#8212but if it isn't an oxymoron to say so, it's in many respects the first modern Western, the one that established the template for the genre's highest period. Part of that has to do with the man behind the camera; part of that has to do with this being his first picture with his leading man of choice, and the actor who defines the genre. But more of it is that it's just a damn fine movie from Hollywood's most fertile year, 1939. The Wizard of Oz and Gone With The Wind get a lot of the love from that year, but if you want to saddle up, friend, you really cannot do any better than Stagecoach.

There are many reasons that may be so, and a lot of them stem from Dudley Nichols' excellent screenplay. Director John Ford was already a veteran of the Western&#8212Criterion's prodigious release even gives us a full-length Ford silent, <b>Bucking Broadway</b>, from 1917&#8212and here you feel him really allowing himself to work expansively, to put his mark on some well-worn territory, to indelible effect. John Wayne, too, had made more than his share of pictures by this point, and wasn't anything close to the iconic figure he later became&#8212they weren't naming airports for the guy in endless two-reelers&#8212but here you get the sense that a star is born, that Ford has found his man. (The movie doesn't just set the template for similar pictures&#8212you can see the seeds of the relationship between, say, Akira Kurosawa and Toshiro Mifune, or Martin Scorsese and Robert De Niro, here as well.) But as Jim Kitses points out on his thorough commentary track, one of the things that's so great about the movie is that it's not at all a star turn for Wayne&#8212he's very much part of the ensemble, and he's surrounded by many savvy veterans. <br><br> It's a pretty basic story, about&#8212surprise!&#8212a stagecoach, traveling through dangerous country, looking to make its destination and avoid the attacks of the bloodthirsty Geronimo and his kinsmen. Each character is finely etched, even if some of the performances are sort of stock: Andy Devine as the stagecoach driver, for instance. Thomas Mitchell is wondrous as the drunken Doc Boone; John Carradine favors Edgar Allen Poe as Hatfield, the Southern gentleman; Donald Meek is a pip as Peacock, the mild-mannered liquor salesman; Berton Churchill is marvelously blustery and as a corrupt banker. Wayne plays the notorious Ringo Kid, who has busted out of jail&#8212he's a good man who has done some bad things, and he's got some scores to settle. And then there are the women: Louise Platt as Mrs. Mallory, all virtue, hoping to catch up to her husband, and Claire Trevor as Dallas, who's being run out of town. This being the days of the Hays Code, they cannot actually call her a prostitute, but there's no doubt about just what it is she does to make rent. <br><br> Ford clearly loves his actors, and is happy to let the camera linger on their expressive faces&#8212it's almost as if he's got more faith in them than in his script, a silent picture director's inherent suspicion of too much talk. The film grammar is pretty elemental&#8212establishing master shot, singles on each actor, then back to the master&#8212but it gives a cleanness to the style that's really quite elegant. And the whole undertaking is a paragon of story construction&#8212not a frame is wasted, everything keeps the story moving forward, and we're kept up with nearly a dozen central characters, their dilemmas, emotions and changes. <br><br> As with so many Ford pictures, and as with almost all Westerns, this is fundamentally a movie about community&#8212are you with us, or are you against us?&#8212and hence we get many shots of people walking through doors, signifying who's with us on the stagecoach, and who isn't. But it's never heavy handed, and even in the obvious matte shots, Ford's love of the West comes through. Of course there's the inevitable Act 3 attack by the Indians, and literally, the cavalry gets called in, in a marvelously visceral piece of filmmaking. Orson Welles went to school on this movie before making <b>Citizen Kane</b>; you can see why. <br><br> Criterion's release of the title truly is a dilly. The picture quality is top notch, and the restoration work makes many of the images just glisten. Aside from an original trailer, the first disc holds the feature and Kitses' commentary, which gives an overview of Ford's career, a history of the Western and the place of this movie in it, and even lets us know what each actor's salary for the picture was. (John Wayne: $3,700.) Disc Two, along with the silent feature, has a 1968 interview (01h:12m:24s)with the director, relishing his old codger status; the ubiquitous Peter Bogdanovich and his ascot, discussing the movie (14m:16s); a visual essay (21m:49s) by Tag Gallagher on the film's visual style, which is mighty auteurist and awfully highfalutin'. The hits just keep on coming: Dan Ford (7m:12s), the director's grandson, offering up thoughts on his family's home movies; Deadspin centerfold Buzz Bissinger discussing a principal location, Monument Valley (10m:44s); an appreciation of Yakima Canutt, who performed many of the picture's stunts (9m:59s). A 1949 radio adaptation features Wayne and Trevor reprising their roles&#8212you can listen to it from your DVD player, or copy the MP3. (My iPod just got a whole lot cooler with John Wayne on it.) The accompanying booklet features an essay on the film by David Cairns; and the short story by Ernest Haycox, first published in Collier's, on which the screenplay was based. The ample delights of the set are almost as wonderful as the movie itself&#8212a tip of the Stetson and a round on me to our friends at Criterion. </p><p class="credit" align="right">Jon Danziger May 21, 2010, 12:18 pm</p></p></div> </div> </section> <footer><p class="foot"><a href="ducu.php">Home</a> | <a href="r-reviews.php">Review Vault</a> | <a href="r-inteviews.php">Interviews</a> | <a href="r-articles.php">Articles</a> | <a href="r-apps.php">Apps</a> | <a href="r-about.php">About</a> | <a href="mailto:webmaster@digitallyobsessed.com">Contact</a></p> <div id="botad" align="center"> </div> <div id="copyright">&copy; Copyright 1999-2019<div> </footer></div> <script type='text/javascript'>var _merchantSettings=_merchantSettings || [];_merchantSettings.push(['AT', '11l8pS']);(function(){var autolink=document.createElement('script');autolink.type='text/javascript';autolink.async=true; autolink.src= ('https:' == document.location.protocol) ? 'https://autolinkmaker.itunes.apple.com/js/itunes_autolinkmaker.js' : 'http://autolinkmaker.itunes.apple.com/js/itunes_autolinkmaker.js';var s=document.getElementsByTagName('script')[0];s.parentNode.insertBefore(autolink, s);})();</script> </body> <script>'undefined'=== typeof _trfq || (window._trfq = []);'undefined'=== typeof _trfd && (window._trfd=[]),_trfd.push({'tccl.baseHost':'secureserver.net'},{'ap':'cpsh'},{'server':'p3plcpnl0694'},{'dcenter':'p3'},{'id':'808962'}) // Monitoring performance to make your website faster. If you want to opt-out, please contact web hosting support.</script><script src='https://img1.wsimg.com/traffic-assets/js/tccl.min.js'></script><script src='https://img1.wsimg.com/traffic-assets/js/tccl-tti.min.js' onload='window.tti.calculateTTI()'></script></html>