ņIĒd rather die than go back to him.Ņ - Shoko (Mairko Kaga) ± Pleasures of the Flesh 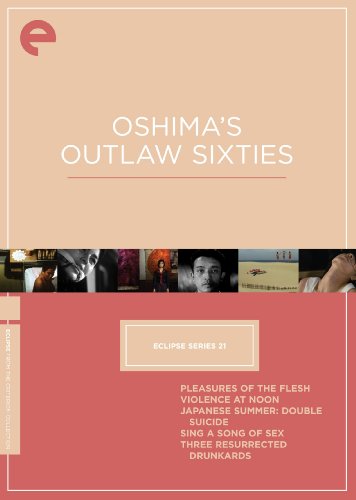 Criterion does a fine enough job bringing world-class cinema to the masses, but their Eclipse Series continues to be a great way to discover those foreign filmmakers that might otherwise go unnoticed, Nagisa Oshima included.

Japanese director Nagisa Oshima is perhaps best known for helming the ultra-controversial 1976 film In the Realm of the Senses. He also helmed the cultish David Bowie-starrer Merry Christmas, Mr. Lawrence in 1983, but itĒs his pre-Euro-Japanese works that have virtually gone unseen in North America. Until now, that is, once again thanks to the Criterion Collection, who have compiled five of OshimaĒs films from the mid-to-late 1960s and made them the next entry in their heralded Eclipse Series of DVDs. OshimaĒs Outlaw Sixties (Eclipse Series 21) is actually one of CriterionĒs better entries in this series, as each film is an important addition to a wonderful directorĒs filmography.

The first of the films in this bare bones collection (none of the films in CriterionĒs Eclipse Series contains supplemental material) is 1965Ēs Pleasures of the Flesh. This Black & White film focuses on Atsushi Wakizaka (Katsuo Nakamura), who longs (from a distance) for the love of a schoolgirl named Shoko (Mairko Kaga). AtsushiĒs stalker-esque practices result in him being the sole witness as Shoko is molested. Taking matters into his own hands (and with plenty of prodding from ShokoĒs parents), Atsushi kills her attacker, but he doesnĒt realize that someone saw him do it. This someone comes at Atsushi with a proposition that could lead him down a much darker path than he is already on. Based on Yamada FutaroĒs Pleasures Inside the Coffin, this is a wonderful film, and easily the most easily accessible of OshimaĒs films in this box set.

Violence at Noon, from 1966, tells the tale of a serial killer named Eisuke (Kei Sato), who weasels his way into ladiesĒ homes, where he assaults and murders them. Ironically, Eisuke has a pair of women who look out for him and keep him safe from the authorities: his wife, Matsuko (Akiko Koyama) and a woman, whom he raped, named Shino Shinozaki (Saeda Kawaguchi). This is a much more surreal, challenging work than Pleasures of the Flesh, and is based on an actual criminal who went on a spree of sex crimes from 1957-1958, as chronicled in Takeda TaijunĒs novel, The Daylight Demon. The challenging nature of this film makes it the more interesting work as well, placing it among the best this set has to offer.

Next up is 1967Ēs Sing a Song of Sex, which, despite a fun title, is the least compelling film in this set. The focus here is a group of Japanese high school students who, naturally, canĒt think of many things other than sex. The ņleaderŅ of the group is Toyoaki (Ichiro Araki, a Japanese pop singer at the time), and one night, while at dinner with their professor (Juzo Itami), they hear a song that leads them down a dark path of sexual deviation. This project is extremely interesting in that it was shot without a script, which helps lead to an intriguing premise and first half hour or so. Then, things begin to fall apart, with the loose storyline resulting in a sort of jumbled mess, as Oshima struggles to find his way towards a satisfying pay-off and conclusion.

We get a heavy dose of dark comedy in Japanese Summer: Double Suicide, a 1967 flick that features a dangerous encounter between a sex-starved teenage girl named Nejiko (Keiko Sakurai), Otoko (Kei Sato), a man contemplating suicide, and some Yakuza looking for buried guns. ThatĒs a hell of a premise to begin with, but Oshima takes things to another level when Nejiko and Otoko are forced to go with the Yakuza to a hideout, where they find themselves in the middle of a gang war. This is the most fun trip youĒll have during OshimaĒs Outlaw Sixties, including an ending that is simply stellar.

The fifth and final film in the set is 1968Ēs Three Resurrected Drunkards. This film functions, albeit indirectly, as a vessel for Oshima to air his feelings regarding both the relationship between Japan and Korea at the time, and the Vietnam War. Oshima takes a huge risk here though, in that much of the filmĒs effectiveness lies in a gimmick that comes into play around the 40-minute mark. For spoiler reasons, IĒll refrain from going into this more, but itĒs a gimmick that works to perfection, resulting in a perfect way to bring this stellar box set to a close.