́A lot of people, when they think of Atlanta, might think of more of the party element.î - Bradford Cox 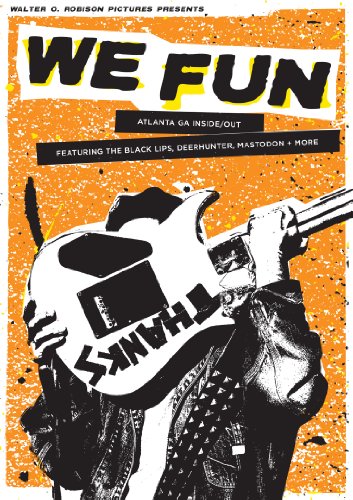 As a huge fan of indie rock, I'm really looking forward to this look at the Atlanta music scene, and the promise of a Deerhunter appearance, makes this all the more appealing.

Until recently, those music lovers living outside of the state of Georgia only associated a few rock bands with the city of Atlanta. The most popular of these bands is R.E.M., but The Black Crows and The B-52s have sold their fare share of records over the years as well. These days thereís a new, emerging music scene in the former Olympic city, albeit one with a decidedly indie rock flair. Filmmaker Matthew Robison chronicles a collection of these up-and-coming bands in his debut feature We Fun: Atlanta GA Inside/Out. Running for just over an hour, this brief look at the bands Deerhunter, The Black Lips, Carbonas, Mastodon, Bobby and the Soft Spots, King Khan and the Shrines, The Subsonics, Baby Shakes, and The Coat Hangers, among others, is a great way for anyone with an open mind about seeking out good, non-mainstream music, to get their fix and possibly discover a new favorite band along the way.

The stand-out band in the film, at least for me, is Deerhunter, led by charismatic front-man Bradford Cox. Deerhunter is one of maybe three bands chronicled in We Fun to have their songs find an audience outside of Atlanta, yet being familiar with their work only added to my appreciation of their portion of this documentary. The live footage from one of their Atlanta concerts, presents the band as one that is appropriately confident about their moody, atmospheric music. Interview footage with Cox shows that heís a much larger personality than his thin physical appearance might suggest. Fortunately, despite the bandís success, he apparently hasnít let anything go to his head and is keeping his ego in check and Atlanta close to his heart.

Despite my affinity towards Deerhunter, the bulk of the movieís screen time is devoted to The Black Lips. Considered a ́flower-punkî band, the Lips have played live shows around the world (including a show I attended, opening for Jack Whiteís The Raconteurs), and released five albums to date. They are featured in some great concert footage, giving us only a hint of how crazy their live shows apparently get. Still, showcasing The Black Lips is for another film, perhaps, as the focus here is the bandís Atlanta ́upbringing.î This focus leads to arguably the filmís most poignant discussion, as members of the band lead a detailed discussion about the fine line versus touring to get their music ́out thereî versus staying confined to Atlanta. They talk about avoiding the ́Atlanta Syndrome,î which applies to those bands (many of which are chronicled in We Fun, who, indeed, never got their music played outside of their hometown, and have yet to enjoy Black Lips-type success.

The rest of the film gives short-shrift to the remaining bands, but just getting a look at the likes of Mastodon and The Subsonics is a treat. While We Fun is far from the most comprehensive documentary to come to DVD in recent years, it is, ahem, a lot of fun. The balance of music and interview material is well-managed by Robison, and he adds just enough artistic flare to his directorial approach to add a little special something to the film. MVD Visualís DVD release of We Fun is nothing flashy, but, in keeping to the independent roots of the filmís subject(s), it is a more than adequate release. While the video quality varies depending on a given interview or concert setting, the audio is always strong, especially during the live performances. Thereís a couple of extras on board too, including a nice tribute to BJ Womack, a fixture on the Atlanta music scene, the trailer for the film, and an extended version of Bradford Cox performing ́Calvary Scars.î