DVD Review: BY BRAKHAGE: AN ANTHOLOGY VOLUMES ONE AND TWO (BLU-RAY) 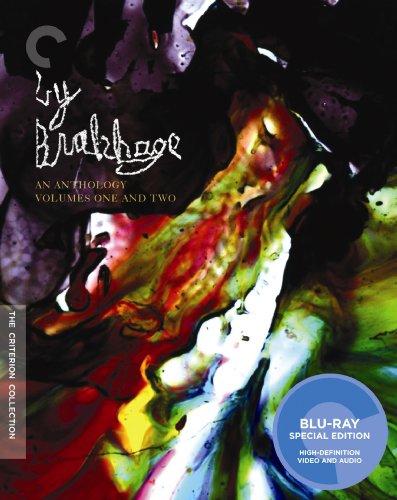 It's so great that The Criterion Collection continues to release their standard definition releases on Blu-ray, and the decision to put all of their Stan Brakhage collection into one, amazing Blu-ray package is their best move yet.

Watching avant garde cinema is the epitome of a polarizing experience. One either ņgets itŅ in regards to what theyĒre viewing, or theyĒre totally turned off by the images and (sometimes) themes that an avant garde filmmaker is trying to convey on screen. Stan Brakhage is one of avant garde filmĒs pioneers, making his first short film, Interim, way back in 1952, and shooting more than 350 such works in the years leading up to his death in 2003. Brakhage stands out amongst the rest of the avant garde filmmakers, in that he concentrates nearly entirely on visual experimentation, challenging his viewers with each and every subsequent film to use their eyes to guide them on a journey of discovery and realization about everything around us.

ItĒs clear from the moment we witness the first film (the wonderfully creepy Desistfilm) in this Blu-ray collection from Criterion titled By Brakhage: An Anthology Volumes One and Two, that Brakhage isnĒt interested in the cinematic aspects of film that other avant garde masters (Jean-Luc Godard, as a prime example) are. Instead, as evident in the likes of Dog Star Man (arguably his most famous work), Wedlock House: An Intercourse, and Scenes From Under Childhood, Section One, Brakhage breaks nearly every rule of cinema. Fortunately, none of this rule-breaking ever seems forced and always comes across as a natural, intentional release for Brakhage; a true embodiment of how he views the world and its myriad of wonders.

Some of the more challenging (even for those relatively immune to being shocked) films on this set include the aforementioned Dog Star Man and Mothlight, but The Act of Seeing With OneĒs Own Eyes is one of the toughest films IĒve ever sat through. This nearly 32-minute film consists of nothing but autopsy footage, without narration, music, or commentary. While it might be easy to simply dismiss such a film as pointless, grotesquery, itĒs actually a study in the power and stamina involved with the experience of sitting through such a visual experience. This is truly difficult material to witness, but with the right group of people, this is the epitome of an event-viewing experience.

After a pair of separate, standard definition releases from The Criterion Collection, all of those films are brought together into one spectacular Blu-ray package. The first disc, naturally, compiles the films from the first collection, and at least slightly upgrades their overall look, thanks to an apparent emphasis on revitalizing the colors in those films that contain at least a glimmer of a lively palette. ThereĒs also an added depth to most of the films, thanks to some prominent grain brought out in the 16mm source material. In all, there isnĒt a great deal of improvement over the standard-def DVDs in the audio or video department, but the Blu-ray format gives us the same collection on 3 discs instead of 5, allowing them to be housed in CriterionĒs wonderful box. An added bonus is the 94-page book that touches on everything from the filmsĒ content to their preservation.

LetĒs be frank, some people will be downright bored to death by this material, and at times (namely, during The Act of Seeing With OneĒs Own Eyes) shaken-up by what they see. However, having all of these films available in a package such as this makes it far easier to digest, in that we can pick and choose exactly what part of BrakhageĒs filmography we want to view at a given time. Not only can we pick and choose the films from distinctly spelled-out chapter stops, but the accompanying book is almost a must-read prior to viewing each of the pieces. ThatĒs the thing with Brakhage, whether youĒre a seasoned-veteran of his work or are having that initial ņWhat the f%^k is this?!Ņ reaction that most first-timers have upon seeing one of his films, itĒs difficult to argue that at least some textual accompaniment is mandatory. Awesome booklet or not, this is a hell of a Blu-ray set that all film fans should own.