"She's like a crack whore, without the dignity." - Alex (Arielle Kebbel) 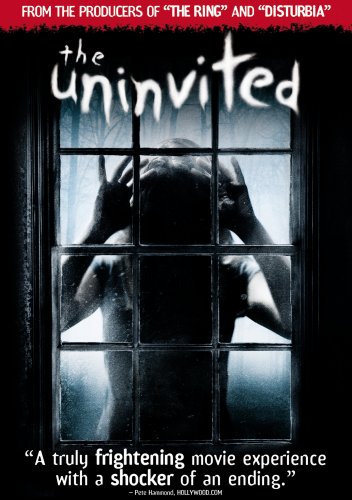 Rehashes of Asian horror movies are becoming commonplace, but given the right treatment, they can be effective. Case in point: this American reworking of the Korean picture A Tale of Two Sisters, which manages to keep a lot of the creepy atmosphere of the original while successfully dumbing it down for us Yanks. A brisk pace and a brief running time help keep it from wearing out its welcome.

The story centers on teenaged Anna (Emily Browning), who had a suicidal breakdown after the death of her invalid mother in a fire. Released from the psychiatric hospital, she returns to her father (David Strathairn) only to learn he has taken up with mother's caretaker, Rachel (Elizabeth Banks). Anna quickly suspects that Rachel not only is not who she claims to be, but may have had something to do with mother's death, and her sister Alex (Arielle Kebbel) agrees there may be something to Anna's theory, if they can just find some proof. But Anna is plagued by nightmares and disturbing visions, making it unclear whether they're warnings from beyond the grave or just hallucinations.

Stories with unreliable narrators are often disorienting, and The Uninvited makes the most of the theme. There are frequent detours into clichČd horror tropes, which then are revealed to be tricks of Anna's disturbed mind. Perhaps she acquired them from watching American remakes of Asian horrors. That also results in more than the standard quota of cheap jump scares, but they're supported by a thorough-going sense of uneasiness that makes the whole work better than it really ought to. The eerie musical score by Christopher Young doesn't hurt one bit.

But no technique would help matters if Anna weren't convincing, and Emily Browning (A Series of Unfortunate Events) really carries it off with aplomb. She is frequently devastating, giving a convincing portrayal of a girl on the edge, too easily carried along by her obsessions and possibly her madness. She plays nicely off Arielle Kebbel, and they have a pretty good sisterly relationship despite not looking much like one another. Banks is suitably creepy as the ostensible wicked stepmother, both angry and jealous of Anna's relationship with her father. Strathairn is distant and hard to get a grip on for most of the movie, but that pays off well in the finale.

It's hard to discuss this picture and its forebear without delving into spoilers; suffice it to say that the less one knows about the movie, the more effective it will be. Even though who have seen the original will find plenty to like here, especially for those who (like me, I'm not ashamed to say) were baffled a bit by the cryptic and more than a little ambiguous Korean version. There's no mystery at all left behind at the finale of the American version, which hurts its longevity but will probably make it more satisfying to mass audiences. The MPAA isn't kidding when it warns about disturbing imagery; there are a few moments that will be shocking to all but the most jaded.

The transfer is unsurprisingly solid and detailed; the nighttime sequences have good clarity despite deep darknesses. The extras are all presented in HD, and include a spoiler-filled EPK style documentary, Unlocking The Uninvited (19m:00s). There four inconsequential deleted scenes that mostly fill out Anna's relationships with Alex and Rachel. Finally, there's an alternate ending that isn't alternate so much as it is unnecessary.