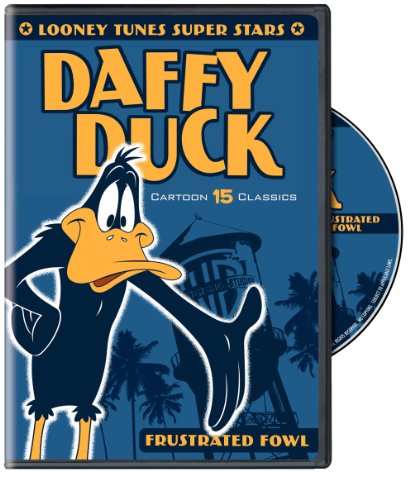 You simply can never go wrong with anything Looney Tunes-related, so this is sure to be another excellent DVD collection of cartoon classics.

When I received my copy of Looney Tunes Super Stars: Daffy Duck Frustrated Fowl, I instantly wondered why we needed another Looney Tunes DVD that rehashed the same cartoons that are already available in one of WarnerĒs awesome Golden Collection releases. However, when I began exploring this disc, I realized that each and every one of these 15 shorts was tucked away in a vault somewhere until now. Their debut on the format is surely a welcome one, but IĒm not sure why Warner chose to release these unearthed cartoons on Looney Tunes character-specific discs rather than as another volume of the Golden Collection. Still, itĒs great to have more classic Looney Tunes shorts available in any capacity, so however Warner chooses to get them to DVD is ok in my (and most fansĒ) book.

The cartoons here arenĒt as technically impressive as those in the Golden Collection releases, but they still look and sound like theyĒve been nicely restored. They also carry with them a warning that they are ņIntended for the Adult Collector and May Not Be Suitable for Children.Ņ Parents (myself included) should heed this warning as these shorts were made at a time where things that are now considered racist and inappropriate, werenĒt exactly thought of the same way back then.

The 15 shorts that we get are: Tick Tock Tuckered, during which Daffy and his buddy Porky Pig are scolded after arriving late for work. Their solution: to go to bed early and not oversleep, although IĒm sure itĒs no surprise that their plan doesnĒt exactly work. In Nasty Quacks, we see Daffy at his, well, daffiest, as this is a mini-origin story for our favorite nutty duck. The oddly-named Daffy Dilly is up next, and this isnĒt as engaging or funny as the first two shorts. Instead, we get Daffy trying to make a millionaire laugh before he dies, as heĒs promised a fortune to anyone that can pull off such a feat. This is a potentially hilarious concept, but there just arenĒt many laughs to be had.

In Wise Quackers, Daffy has just missed the annual flight south, and is soon under fire by Elmer FuddĒs hunting rifle. Be warned that, despite it being very funny, this is, indeed, one of the shorts that push the Politically Correct boundaries of modern society. The Prize Pest, involves Porky winning a radio contest and his prize being none other than Daffy himself, resulting in one of the funniest shorts on the disc. Design for Leaving, is one of the neater cartoons here, in that it involves Daffy introducing Elmer to futuristic electronic devices, and itĒs extremely interesting to look back and see what was considered ņfuturisticŅ so many decades ago.

Stork Naked, is one of the least interesting shorts because it gives us a Daffy thatĒs way too tame. HeĒs always at his funniest when heĒs at least slightly out of control, and in this story that presents him as a new Father, thereĒs not really any opportunity for daffy Daffy to come out. ThereĒs not much Daffy at all in the seemingly misplaced This Is a Life?, (the skit centers around Bugs Bunny), but the good news is that we finally have a Yosemite Sam sighting! Dime to Retire takes us back to the Daffy that we know and love as he coerces Porky to stay at his dilapidated hotel, causing the pig nothing but problems. In Ducking the Devil, my second favorite Looney Tunes character comes storming onto the screen. Yep, itĒs the Tasmanian Devil, and he is at his out-of-control best, attempting to avoid Daffy who wants to capture him and collect a cash reward.

People Are Bunny and Person to Bunny are up next, and itĒs not only their titles that are similar. These are both Bugs-centric shorts, and, even though they are quite funny, they seem out of place on a disc with only DaffyĒs name in its title. WeĒre back to concentrating on the duck in the discĒs final three episodes, DaffyĒs Inn Trouble, The Iceman Ducketh, and Suppressed Duck. All three are good shorts, but they, like many of the other cartoons on this disc, canĒt quite reach the comedic heights of the classic stuff that Looney Tunes has given us through the years. This is still a release that die-hard Looney Tunes (and especially Daffy Duck) will want to add to their DVD collections as soon as possible.