“First time in my life I bought $40 shoes, and they gave me corns.” - Billy Edwards 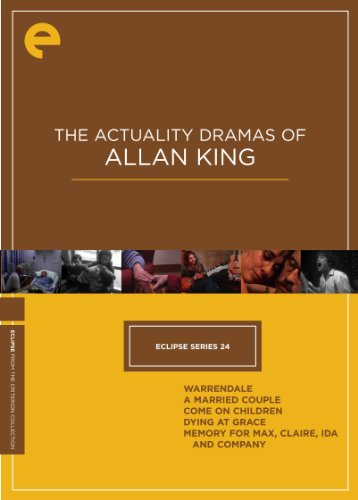 This appears to be the ultimate box set for fans of documentary filmmaking, as the best of this Canadian director are on display thanks to The Criterion Collection.

Canadian filmmaker Allan King died in the summer of 2009 at the age of 79. Fortunately, he left behind over 50 years worth of films that will remain with anyone who sees them for the rest of their lives. While he directed his share of fictional movies and television, King is best known as a documentarian. He even pioneered a vérité documentary film movement that is now known as Direct Cinema, despite King, himself, consistently referring to these films as “actuality dramas.” Unfortunately, most of these films have been virtually unattainable from anywhere other than from King personally, until now, as The Criterion Collection brings us five of them in a nice box set titled The Actuality Dramas of Allan King (Eclipse Series 24).

The first movie in the collection is the beyond compelling, Warrendale. This 1967 film focuses on people who have been involuntarily institutionalized at the titular group home. The real power behind this film is that the people in question are children. The focus is on three specific children, Carol, Irene, and Tony, and two counselors named Tony and Walter. They’ve come up with a (supposedly) therapeutic technique that they call “holding” that pretty much is what it sounds like; the children are give free reign to release all of their anger and frustration, as long as they’re being held by one of the counselors. Many of these sequences are extremely tough to watch, but crafting such empathetic responses from the audience is clearly what King is after here. He stays off-screen more often than not, but his mastery of his subject matter is already evident, and it’s pretty amazing to see a filmmaker hit his stride right off the bat like this.

Next up is A Married Couple from 1969. Here, the focus is not on a group home, but on a…wait for it…married couple, specifically, Antoinette and Billy Edwards. King brings his camera crew right into the Edwards’ home in Toronto, Canada, where he’s given permission to film anything and everything about their lives, including those of their young son (he was 3 years old at the time), Bogart, and their dog, Merton. Many of today’s reality television conventions can be traced all the way back to A Married Couple, as there are numerous instances of the Edwards playing up to the cameras. Whether it’s Antoinette openly flirting with other men or Billy sitting around in the same skimpy shorts all day, things are a little too contrived to be taken totally seriously. Then again, those elements are exactly what people love about modern reality TV, so, once again, Allan King is proving that he was way ahead of his time.

1972’s Come On Children takes the contrivances seen in A Married Couple and multiplies them by a ton. It’s as if the creators of The Real World and similar group-confined-to-a-location reality shows sat down for hours with Come On Children, and did all they could to model their shows after it. Here, we get 10 kids ranging in age from 13 to 19, split evenly between male and female, and put in a farmhouse to live for 10 weeks, devoid of any adult supervision. We see a little bit of everything during the film’s 95 minutes; one of the “kids” gives birth to a son, another talks about giving up drugs while administering drugs to another kid, and there’s even some random destruction inside the house by a few of the teens. Despite the contrivances, this, like the rest of King’s films, is truly riveting stuff, that only makes present-day reality TV seem even more trivial.

The much more recent 2003 film, Dying at Grace puts things at a much more serious, often incredibly sad level. There’s really no avoiding the sadness given the subject matter though, as the film’s focus is on a 14-week visit to the terminal care unit of the Salvation Army Toronto Grace Health Centre, where we witness the final days of Joyce Bone, Carmela Nardone, Eda Simac, Lloyd Greenway, and Rick Pollard. These five people are suffering from the latter stages of cancer, but have agreed, without reserve, to let King film their final hours. And what he captures during this long, nearly 2 ˝ hour film, is simply riveting material that should really be required viewing by anyone with an open mind towards their own, eventual mortality. The first hour of the film is the toughest to get through, as the focus is solely on Bone and Nardone, and the dynamics of both ladies’ personalities and character are brought to the forefront in a way that simply cannot be done on a regular basis, regardless of the documentary’s subject matter. King has given us a film in Dying at Grace, the likes of which we’ll probably never see again.

The fifth and final film in the set is 2005’s Memory for Max, Claire, Ida, and Company. Running for 112 minutes, this movie captures the horrible fates that have befallen eight more elderly people, this time living at Toronto’s Baycrest Centre for Geriatric Care. The factor that makes this film so much more difficult to get through than the already heartbreaking Dying at Grace is that these people suffer from dementia, and other brain altering defects that render them unable to even remember the simplest, yet most intimate aspects of their lives. One individual can’t remember the passing of one of their dearest friends, and to watch them be reminded of their death on a daily basis is beyond crushing. Still, King’s sole purpose isn’t to sell boxes of tissues, as he instead is attempting to capture humanity and the inevitability of mortality, right to both concepts’ very core. Allan King was a genius of a documentarian, and what better way to get acclimated with his masterpieces, than with another excellent addition to The Criterion Collection’s Eclipse Series.