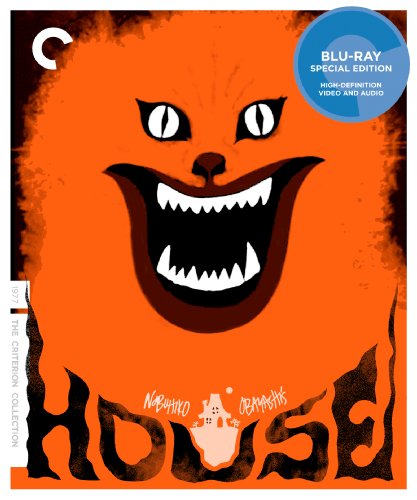 I'd never heard of this flick until about a year ago, but since that first mention of it, the talk has been non-stop. Now, The Criterion Collection makes seeing this obscurity a reality, thanks to this potentially amazing Blu-ray disc.

IĒll be honest, until about a year ago, the only movie titled ņHouseŅ that IĒd heard of was released in 1986, aired on pay-cable television throughout my childhood, and starred not on The Greatest American Hero, himself (William Katt), but also Bull from Night Court. Imagine my surprise when I come to find out that there was, indeed, another movie named House, but this one was released in Japan in 1977, and, thanks to a recent push from Janus Films, now has a huge cult following, despite the fact that many fans of such fare have yet to even seen the flick. Fortunately, JanusĒ recent push includes a stellar Blu-ray release from The Criterion Collection that ensures that the film will become an even bigger part of North American pop culture and possibly even a Halloween staple.

House begins at the end of the school year for a group of Japanese girls. Most of them are headed off for summer vacation together, but one, named Gorgeous (Kimiko Ikegami), is going to her AuntĒs (Yoko Minamida) house during her break. When fate frowns upon the group of girls, Gorgeous invites them to join her, but when they arrive at her AuntĒs they find the woman acting strange, living in this huge, creepy place with only her beloved cat by her side. It soon becomes clear that GorgeousĒ Aunt and her house have evil intentions, and itĒs up to this crafty group of girls to utilize their unique, individual strengths to stay alive, and, literally, in one piece.

House is one of those films that are nearly impossible to describe in words, and simply has to be seen first-hand to appreciate, let alone understand. Then again, IĒm not sure if director Nobuhiko Obayashi even cares whether you understand his debut feature film or not. Before House, Obayashi was a TV commercial director known for an extremely unique visual style that he more than brings to the table here. He even enlisted the help of his then-11- year-old daughter, Chigumi, who provided many of the concepts and ideas that made their way into the film. I mean, who else but a young girl could come up with some of the stuff we see here, from the evil cat to the cannibalistic piano. Of course, IĒm sure Obayashi added the bloodier aspects to his overall vision, but itĒs part of his genius that he knew enough to entrust a young girl with the most important aspects of his first movie.

The band Godiego is another huge key to making House work, blending spooky sounds with consistent music cues that call to mind many an episode of Scooby Doo. They also contribute to some random, full-fledged musical numbers, most memorably a five-minute-plus piece that serves as the filmĒs coda. Whether it proves to be too quirky for you or not (although if it does, I argue that you might be watching the wrong film to begin with), their music plays an integral part throughout, in a similar vein to that of GoblinĒs work on the original Dawn of the Dead, and simply cannot go unrecognized.

ItĒs nearly mandatory that this movie be viewed more than once, and, if possible, schedule that second viewing for no more and no less than a day after the first one. ThereĒs just too much, well, craziness going on during the entire 88-minute running time to take everything in at once. Plus, during my first go-around, I knew I was witnessing something special, but it was during the second screening that I realized the degree of just how much of a classic House truly is. The Criterion Collection sure has treated it like the masterpiece that it is, as their Blu-ray disc is among their best of the year. They offer up a brand-new, HD transfer from a 35mm source culled from the original negative, which, amazingly, is free from any dirt, scratches, or other debris. The LPCM 1.0 audio track is also superb, providing a surprising amount of depth, and consistent dialogue clarity throughout. The extras collection preaches quality over quantity, and includes a short film directed by Nobuhiko Obayashi, as well as a collection of interviews with him, his daughter, and the screenwriter of House, Chino Katsura. Along with the filmĒs trailer, thereĒs also a great, short piece with director Ti West (The House of the Devil), during which he brilliantly sums up the amazing experience of watching House, and gives a ton of insight into the filmĒs importance, in only just over three minutes of time. This is a release that any film fan who likes to think outside of the multiplex should pick up as soon as possible.