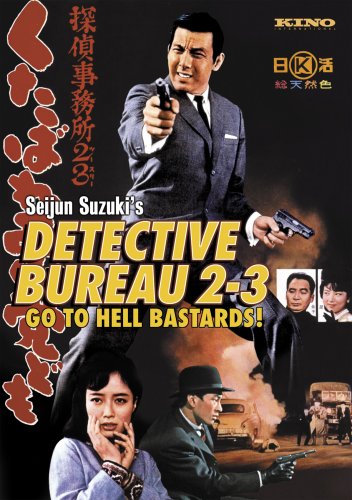 A dozen dead Yakuza and a Pepsi truck up in flames even before the credits roll. I am so in.

I mean, isn't the title alone, with its lack of internal punctuation and final exclamation point, enough to endear this movie to you? It's an hour and a half of early 1960s Yakuza mayhem, and only a party pooper would want to spend time graphing out the plot. It feels like director Seijun Suzuki took this on as a contract job, but the restraints of doing a relatively low-budget genre piece allowed him to find new ways to produce cinematic flairˇit kind of feels like some of the over-the-top Samuel Fuller movies of the same period, pictures like The Naked Kiss and Shock Corridor.

The opening aria situates us for the coming all-out Yakuza war: there's been a turf battle between crime clans, and a single survivor who knows the details and could name names. But he's a member of the brotherhood, and isn't turning state's for anybodyˇso our hero, an upright detective played by the dashing Jo Shishido, takes advantage of his passing likeness to a Japanese gangster from out of town to infiltrate the local mob. It's a pretty conventional set-up, and has endured right down to movies like The Departed.

It's a movie that values style over sense, but it's got style to burn, so it's kind of a pleasure to let it all wash over you. You may be particularly taken with the natty gangsters, who favor ascots and pocket squares, fedoras and bowlers, looking more like an Oxbridge debating society at times than like an organized-crime undertaking. There's also the strange presence of Western culture right here in the heart of the high Austin Powers periodˇthe nightclubs that the bad guys favor features groovy jazz, baby! And it probably comes as no surprise that the women are treated as little more than pieces of eye candy, as gun molls and nightclub singersˇthere's a surprising frankness about some Yakuza sexual dysfunction, however, and the movie merrily traffics in some old-school virgin/whore dichotomies. (A couple of cops are undercover as Catholic priests, for good measure.) The only extras are trailers for a couple of other pictures in the genre (Cops vs. Thugs and Yakuza Graveyard), and a gallery of a dozen or so promotional stills.