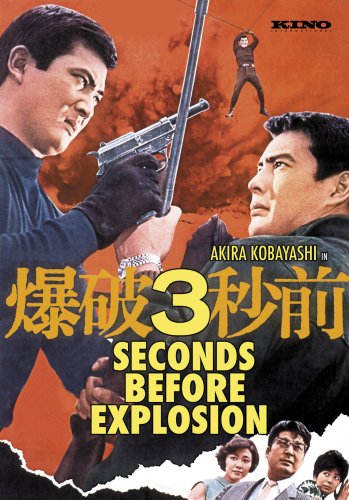 Kino keeps bringing the Yakuza bon bons, and like a moth to the flame is your faithful reviewer drawn to these DVDs.

We're used to violence from our action movies, but even by the Yakuza standard, this one is particularly sadistic. As much as anything, this is a catalog of torture techniques, enthusiastically inflictedˇwhips and needles, strobe lights and piercing sounds are all trotted out for our enjoyment. (Dick Cheney, you might want to add this one to your Netflix queue.) It's hard to love a movie that's this misanthropic, but so much stuff gets blown up and shot up so often that the adrenaline rush is likely to keep you watching, especially given that it runs a lean 84 minutes.

You're surely not tuning in for some paradigmatic Aristotelian storytelling, though, that's for sureˇeven teasing out the plot strands for the purposes of an online review seems like a fool's errand. Akira Kobayashi is mighty charismatic in the lead, a fellow who infiltrates an organized-crime ring, and it's a picture with enough conspiracy theories to fill out a couple of Oliver Stone moviesˇmost of them here have to do with international jewel smugglers, and Kobayashi's Yabuki is nominally a tortured spy remade to go work for the enemy. I admit to being particularly enchanted by Yabuki's new boss, a bad guy who looks like a scarred, Asian Robert Evans, and has the ego to match.

The spirit of fun and mayhem isn't always matched by technical skill in filmmaking, howeverˇsome of the fight sequences are shot particularly poorly, and you may laugh out loud at how far the stunt blows are from hitting their alleged targets. Someone at Kino had a good time coming up with chapter titles for this as wellˇmy favorite is probably "Warehouse Throwdown," though I admit to looking at the menu in haste and without my glasses, and being tantalized by the possibility of Chapter 4 being a whorehouse throwdown. Along with a stills gallery, the only extras here are trailers for more pictures apparently cut from the same bolt of cloth, Cops vs. Thugs and Yakuza Graveyard.