“You don’t need to do that. We don’t usually mow the lawn.” - The Girl (Blanca Engström) 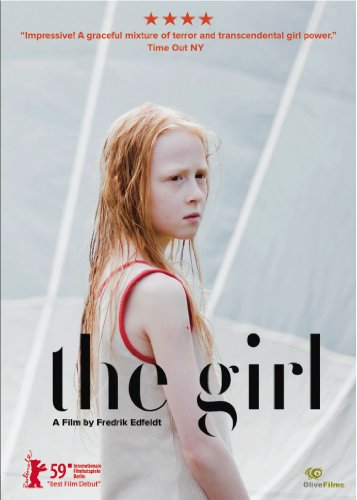 Very little is said about this Swedish thriller on the DVD cover, but the ominous, creepy picture more than likely says a lot for what's in store here. Then again, given the ambiguity, I could be totally wrong.

When I sat down with the 2009 Swedish film, The Girl, I really had no idea what to expect, thanks in large part to the following quote that graces the top of the DVD case: “Impressive! A graceful mixture of terror and transcendental girl power!” While my first thoughts were, “Not another killer kid movie!”, those powerful words and some rather ambiguous cover art made this one of the more mysterious DVD viewing experiences I’ve ever had. About halfway through the film, I still wasn’t sure what I was seeing, but, like many great films do, this one snuck up behind me, and, at about the 60 minute mark, I realized that what I was seeing was pure brilliance. Director Fredrik Edfeldt’s feature film debut is a damn good one, presenting an original tale that is both heart-warming, inspiring, and, indeed, terrifying.

A little red-haired girl (credited simply as “The Girl,” but portrayed by Blanca Engström) is enjoying her life in 1981 Sweden when one day, right before Summer, her parents (also unnamed but portrayed by Annika Hallin and Shanti Roney) decide to pack up and head to Africa for charity work. Unfortunately, the girl is too young to go with them, so she is left at home, and in the care of her aunt, Anna (Tova Magnusson-Norling), a woman who likes to party too much and is usually in no shape to take care of a young child. Anna eventually disappears with her latest beau, and the girl is left to totally fend for herself. However, it’s far too easy for a young girl to forget to clean the house, bathe, and feed herself the right foods, so before long, we’re not only questioning her choices, but her ability to survive.

Say what you will about the realism behind the prospects of parents (and other immediate family) actually leaving an adolescent girl at home to completely care for herself, but the adults in The Girl are the epitome of selfishness. Sure, this takes place in 1981, when the overall culture was totally different than it is today, but child abandonment of this nature isn’t even seen on the local news. Still, Fredrik Edfeldt has a story to tell, so despite the extreme suspension of disbelief required in this case, none of the story elements come across as phony at all. Instead, we’re left reeling once the end credits start rolling, and forgetting some of the required mental stretches becomes as easy as becoming engulfed in what Edfeldt has pulled off.

The film wouldn’t be nearly as powerful as it is without young Blanca Engström’s surprisingly mature performance. Sure, there’s still plenty of child-like vulnerability in what she’s doing, but she comes across as more of an adult than nearly everyone of the cast’s adult members. And, that face…oh, what Engström does with that face! She rarely says a word (a lack of human contact during much of the running time accounts for this), and simply doesn’t need to in expressing her emotions facially. It might be too early to tell, but if The Girl is any indication, Engström could have the goods to deliver amazing performances such as this one, for years to come. In putting this all together and getting such a performance out of her, the future is bright for Edfeldt as well, but Engström could simply be a force to be reckoned with. Unfortunately, Olive Films hasn’t treated The Girl with as much love as I’d like, bestowing no extra features whatsoever here. The audio and video are solid enough, but this film deserves a much more robust DVD than it’s given.