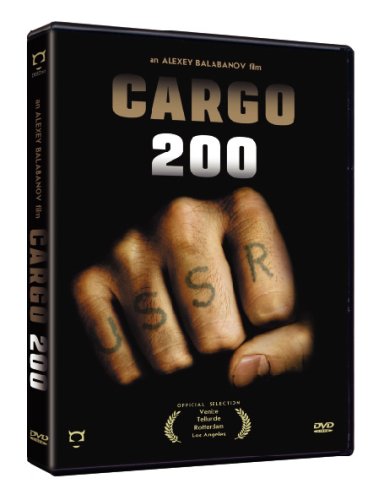 There isn't exactly a ton of Russian black comedies to choose from these days, but this one looks pretty good.

Cargo 200 has the most deceptive DVD packaging IĒve seen in quite some time. The image on the front cover makes it look like weĒre in for a political film centering on a riotous revolution of some kind and the plot description on the back sells the film as a totally different experience than what we actually get. Fortunately, such deception is a good thing in this case, as I felt totally sucker punched when the filmĒs true intentions are revealed. The undercurrent of the film is an anti-Russian one, but director Aleksey Balabanov (Brother), is more concerned about making his audience feel as uncomfortable as possible when they least expect it. Thank goodness for filmmakers who arenĒt afraid to do such a thing.

As the film starts, the plot seems to center on themes of morality and science, as argued about by Artem (Leonid Gromov), a Professor of Scientific Atheism, and his Army Colonel brother, Mikhail (Yuri Stepanov). Even when Artem leaves MikhailĒs house and is forced to stop at a distillery thanks to a broken-down car, the film is still rather ņnormal,Ņ and almost dull at this point. WeĒre then introduced to Anjelika (Agniya Kuznetsova) and Valera (Leonid Bichevin), the best friend and boyfriend of MikhailĒs daughter, respectively. Those two wind up at the same distillery, but when Valera passes out, Anjelika wishes she was lucky enough to have done the same.

The real mastery in BalabanovĒs storytelling technique is how he nearly lulls us to sleep in the beginning, and, after a half hour or so, weĒre still trying to figure out what his filmĒs identity truly is. Then, things start to change, including the tone and we start to realize that we just might be in for something that David Lynch would be more than proud of. Then, it happens; a scene that not only changes the film all over again, but leaves any and all viewers with a shocked expression on their face that never leaves. Even the most shocking movies tend to have that one, ņWhat the hell?Ņ sequence, but here, they just keep coming, and from totally out of the blue each and every time. Even more shocking is the revelation of Capt. ZhurovĒs (Alexsei Poluyan) true colors, as he gradually becomes one of the most terrifying characters in recent memory.

ThereĒs no question that many of the disturbing sequences in this movie will stick you for quite some time, and thatĒs a very good thing. What is in question is how many of these sequences are supposed to be interpreted with the blackest forms of comedy in mind. I, for one, didnĒt see any such humor in these proceedings, and they were that much more effective on a personal level. Still, I wouldnĒt be surprised at all if other viewers saw that black comedy, if only a tinge, and that is a testament to just how much of a masterpiece this truly is. If I see another film from any country this year that has such a profound, shocking, and nightmare-inducing effect on me than Cargo 200, itĒs going to be a banner year for movies.

While the film simply has to be seen by anyone who considers themselves an open-minded filmgoer, this disc is a huge disappointment, despite decent audio and video presentations. ItĒs bad enough that this film isnĒt getting a chance in domestic theaters, but itĒs even worse that we donĒt get a single extra feature on DisinformationĒs DVD. HereĒs hoping it becomes a cult classic and it gets the special edition treatment it deserves at some point down the line.