"I am impotent! And I like it!" - One of a bevy of asylum residents 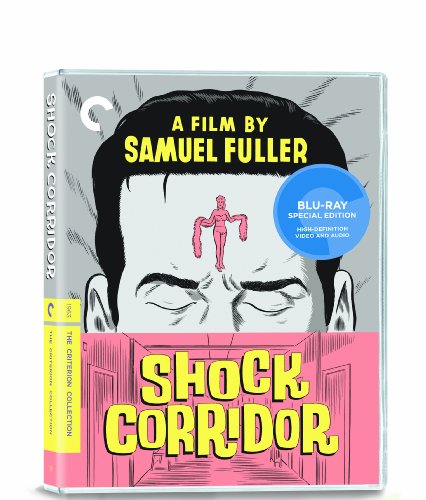 Samuel Fuller has no use for understatement or subtlety, especially when he encamps to the insane asylum.

There's always a little bit of a gnawing fear when you watch a Samuel Fuller movie, that he is in fact in deadly earnest, and doesn't appreciate or doesn't give a damn about how camp he can be—and this movie starts immediately playing on those phobias with a pretentious epigraph from Euripides. Can even Sam Fuller take Sam Fuller at face value? I sort of tend to doubt it, and while he gets some credit for dealing with serious issues—madness, ambition, obsession, even nuclear annihilation—he's really more of a circus performer than a philosopher. And oh, my, the three rings are full to bursting in this one, in a movie that, in many respects, is just flat-out batshit crazy.

Peter Breck stars as Johnny, a frantically ambitious journalist eager to crack a murder mystery, and he knows that the only ones who have the answers have been consigned to the local mental hospital. They won't let him in as a visitor, so he'll have to become a resident—he's going to fake insanity and get himself institutionalized, because that's the way to a Pulitzer Prize, or so he thinks. In a funny way, then, this movie is a crucial influence not just on something like One Flew Over the Cuckoo's Nest, but also media-hungry pranksters like James O'Keefe.

Johnny gets his girlfriend Cathy (Fuller staple Constance Towers) to masquerade as his sister, and to report to the police that her brother is displaying an unhealthy sexual interest in her—nothing like a Biblical taboo to get the popo on the case, even if the story has holes so wide that any viewer of a cop show could drive a truck right through them. Cathy is actually the morally upright, reputable one of the pair—she's a burlesque dancer.

Principally, really, it's a chance for actors to act crazy and bay at the moon, and you can see that they (and their director) love this. We get an opera singer, a civil war general, and a whole cast of crazies on Johnny's merry little ward, and, not surprisingly, he goes native on us. There's definitely some rip-snorting fun, but I think we all may want to resist the notion that Samuel Fuller is some sort of great thinker. He does make terrifically entertaining and deeply crazy movies, though.

Criterion's Blu-ray upgrade of their previous release is a firecracker, with a sharp transfer showing off Stanley Cortez's sharp-edged photography to great advantage. The most notable extra is The Typewriter, the Rifle and the Movie Camera, Tim Robbins' hour-long valentine to Fuller and his work, featuring other prominent fans of the director, like Jim Jarmusch, Quentin Tarantino, and Martin Scorsese. (Scorsese is especially gracious, and Robbins does a great job showing how Scorsese borrowed from Fuller in Raging Bull.) Miss Towers sits for an interview (28m:43s), just as the does on the Naked Kiss Blu-ray; an original trailer, excerpt from Fuller's memoirs, and essay by Robert Polito round out a swanky package.