...restored from original 35mm elements, is presented in widescreen with an aspect ratio of 16 x 9 and 5.1 surround sound mix. Enclosed is a collectible postcard reproduction of the original movie poster and special features include Spanish subtitles, before-and-after film restoration demo and trailer.

In the Classic Tradition of Dracula, Frankenstein & House of Wax, Roger Corman's Horrorfest Sets its Trap! 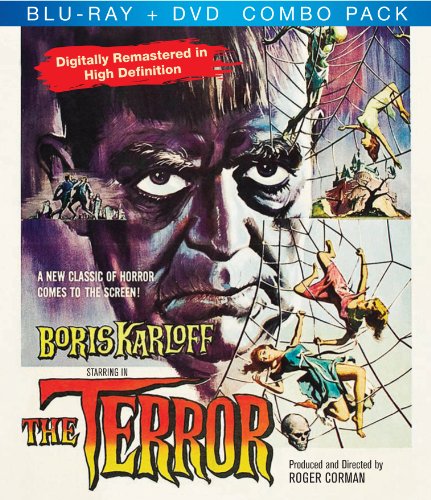 – restored and in HD for the first time ever – will be available in a special DVD/Blu-ray combo pack April 26 from Film Chest on the HD Cinema Classics and CULTRA labels (distributed by Virgil Films & Entertainment).

In 18th century France, Lt. Andre Duvalier (three-time Academy Award-winner Jack Nicholson, The Departed, As Good As It Gets, A Few Good Men), an officer in Napoleon's army, has been separated from his regiment. Wandering near the coast, he spies a young woman (Sandra Knight, Frankenstein's Daughter, Blood Bath) and calls out. When she fails to acknowledge him, he follows her into the dark surf and loses consciousness.

He awakens in a house, tended by an old woman, Katrina (Dorothy Neumann, Sorry, Wrong Number, The Ten Commandments), who claims not to know the mysterious lady. On his way again, Andre comes upon the castle of Baron Victor Frederick Von Leppe (Boris Karloff, Frankenstein, The Mummy, How the Grinch Stole Christmas).

There he learns that the girl is in fact the spirit of the Baron's late wife being used as a pawn by the witchy Katrina, who is bent on driving the elderly Baron to suicide.

Famous for being shot on leftover film sets from other productions, The Terror, produced and directed by Roger Corman, has been released under several titles (Lady of the Shadows, The Castle of Terror and The Haunting) and more recently aired as episodes of the syndicated TV series Cinema Insomnia With Mr. Lobo and Elvira's Movie Macabre (Oct. 3, 2010).

, restored from original 35mm elements, is presented in widescreen with an aspect ratio of 16 x 9 and 5.1 surround sound mix. Enclosed is a collectible postcard reproduction of the original movie poster and special features include Spanish subtitles, before-and-after film restoration demo and trailer.

About Film Chest:
Film Chest, headquartered in New York City, boasts one of the world's largest digitized libraries (10,000+ hours) of classic feature films, television, foreign imports, documentaries, special interest and audio, which it continues to grow aggressively. Founded in 2001, the company offers high-quality content (much in HD) for a wide variety of production and distribution needs and produces collector's sets for consumers. In 2010, Film Chest unveiled three new labels. HD Cinema Classics are films that have been painstakingly restored in HD and 5.1 stereo – utilizing state-of-the art digital technology – from original film assets. American Pop Classics restores classic American film and TV shows from the '30-70s. CULTRA showcases the best (and worst) of cult cinema, a cinematic cesspool of films that are surreal, eccentric, controversial, comical and scary but ultimately engaging and entertaining. With directors who were both visionaries and crackpots, these films were originally misunderstood and rarely a box office success, achieving status by word-of-mouth and underground distribution. Film Chest releases theatrically, on DVD (distributed by Virgil Films & Entertainment) and digitally on iTunes, Netflix, Amazon, Verizon FIOS and more. Visit us online at HYPERLINK