PR: Thoroughbred: Born to Run on DVD MAy 3

...a timeless film that captures the beauty of the thoroughbred breed, the thrilling nature of the sport, and the deep reservoir of history and tradition behind this equine wonder. Directed by Academy Award-winning filmmaker Paul Wagner.

Arlington, Va. – April 11, 2011 – Timed to coincide with this year's Kentucky Derby, taking place on May 7, PBS Distribution is releasing Thoroughbred: Born to Run

More than 40 Minutes of Extras Included on the DVD 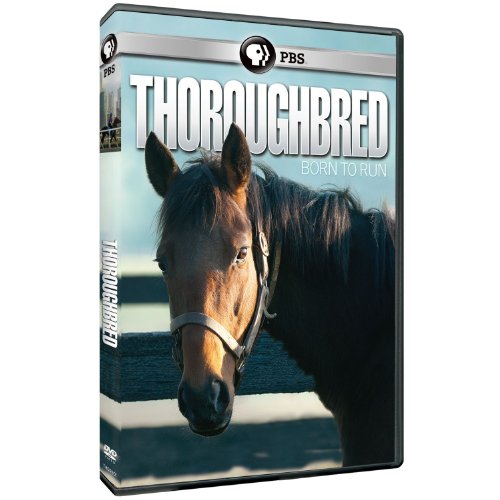 Arlington, Va. – April 11, 2011 – Timed to coincide with this year's Kentucky Derby, taking place on May 7, PBS Distribution is releasing Thoroughbred: Born to Run

on DVD, a timeless film that captures the beauty of the thoroughbred breed, the thrilling nature of the sport, and the deep reservoir of history and tradition behind this equine wonder. Directed by Academy Award®-winning filmmaker Paul Wagner ("The Stone Carvers"), Thoroughbred: Born to Run

travels from central Kentucky to Dubai to trace the breed's fascinating history and to meet the people who breed them, sell them, race them, and love them. From foaling barn to finish line, this documentary explores the story of this remarkable animal and its unique bond with humans.

will explore Aqueduct Racetrack's "backside," where viewers are introduced to an eclectic community of grooms, jockeys, trainers and owners as they prepare for races. These charismatic characters are joined by gamblers, breeders and journalists, who give viewers a glimpse into the fascinating, intense and sometimes heartbreaking world of thoroughbred racing. "THOROUGHBRED: BORN TO RUN" also reveals the serene quiet of the picturesque Three Chimneys Farm located in the heart of Kentucky's bluegrass region. Breeder Arthur Hancock introduces a promising brown mare named Cerise and discusses his storied family history of breeding and racing thoroughbreds, including the 1989 Kentucky Derby winner, Sunday Silence.

From Kentucky, viewers are transported to the Arabian desert, where the origins of the thoroughbred are explored and one of the industry's titans – Sheikh Mohammed bin Rashid Al Maktoum, ruler of Dubai, oversees extravagant stables and the richest series of horse races in the world.

culminates at Louisville's Churchill Downs for the 2009 Kentucky Derby. During the preparations and celebrations of Derby week, owners share their hopes and disappointments, and horses seem to revel in the spotlight as everything comes down to who stands in the winner's circle. As the excitement of the Derby passes, the program ends with a new beginning and new potential: the birth and wobbly first steps of Cerise's foal.

About PBS Distribution
PBS Distribution is the leading media distributor for the public television community, both domestically and internationally. Jointly owned by PBS (Arlington, VA) and WGBH (Boston, MA), PBS Distribution extends the reach of public television programs beyond broadcast while generating revenue for the public television system and our production partners. PBS Distribution offers a diverse range of programming to our customers, including Ken Burns's films (The National Parks, The War, Baseball, Jazz, The Civil War), documentaries from award-winning series NOVA (The Elegant Universe, Origins, The Miracle of Life), FRONTLINE (Bush's War, Growing Up Online), and American Experience (We Shall Remain, Jonestown, New York), dramas from Masterpiece (Jane Eyre, The Inspector Lynley Mysteries), films from independent producers (Latin Music USA, The Botany of Desire, The Story of India, Journey into Buddhism, I.O.U.S.A.), and popular children's programming from Dinosaur Train, Super Why!, WordGirl, Cyberchase, Martha Speaks, Caillou and Arthur.