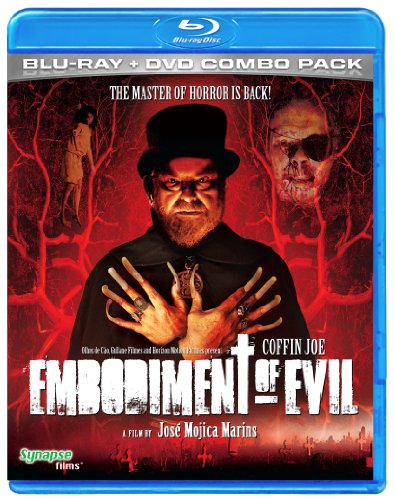 Coffin Joe returns over 40 years since he last appeared on screen. Having this little-seen, low budget shocker on Blu-ray is a nice surprise courtesy of the always great Synapse Films.

The great character, Coffin Joe has been a mainstay of underground, cult cinema since his debut in 1964. Played by actor José Mojica Marins, the character’s feature film debut occurred in that year’s At Midnight I’ll Take Your Soul, which was followed in 1967 by This Night I’ll Possess Your Corpse. Numerous TV appearances followed, but for decades, a second film sequel had been bandied about, but never came to fruition. Then, finally in 2008, Marins and his crew settled on a screenplay that they liked, and put the lens to the return of Coffin Joe, Embodiment of Evil. While 40 years seems like a rather long time between films, fortunately, Marins has no problem stepping back into the role that made him internationally famous, and, while the film itself is far from perfect, it still embodies (no pun intended) the spirit and feel of the rest of the Coffin Joe saga. Embodiment of Evil comes to Blu-ray via Synapse Films, and it’s a more than solid package, both technically, and in the extra features department.

Coffin Joe (José Mojica Marins) has been in the “mental section” of a prison for the last 40 years. While the rest of the world has gone on outside, Joe has been itching to do some more female torturing, in the unending search for the perfect woman to have his children. Having finally served his entire prison term, it’s time for Joe to go back into society. While this is not exactly the best thing for society, Joe is ecstatic, and it isn’t long before he has his first victim, and then the next, and then the next 10. Fortunately, there are some people in Brazil who realize that what Coffin Joe is doing isn’t exactly, well, the right way for someone to behave, and a group, led by Captain Osvaldo Pontes (Adriano Stuart) and his brother Coronel Claudiomiro Pontes (Jece Valadăo) set out to finally put an end to his reign of (often female-specific) terror.

To call Embodiment of Evil a “good movie” would not only be, well, not true, but also would be a disservice to filmmaker/star José Mojica Marins’ intentions. He’s not out to make a time-honored cinematic classic by any stretch of the imagination, nor was he trying to do so with the other Coffin Joe films. He’s really out to make a series of films that people, more specifically cult film fans, simply can’t turn away from. Not only that, but he wanted to make movies that this demographic would want to keep their eyes glued to the screen during, taking in each and every ounce of blood, guts, gore, and nudity, like it was the first time they’d ever seen it in a film. Sure, enough, that’s exactly what was accomplished here, as at least this cult film fan was fascinated by each and every frame. I’ve seen gorier, edgier films, with far more offensive imagery, but in watching this, it’s obvious that Marins was having an absolute blast being in his element and revisiting such an iconic character.

Embodiment of Evil, and any of the Coffin Joe films, for that matter, simply wouldn’t be the same without José Mojica Marins. At the young age of 75 years old, Marins can still craft quite the imposing figure on screen. Sure, it helps that he’s wearing the same symbolic costume that he’s worn for all of these years, but he never comes across as just some old man trying to play a character he should have given up on years ago. Quite the contrary, as he does a fantastic job, even arguably a better job than he ever has playing Coffin Joe. I’ll admit, I wasn’t the consummate die hard Coffin Joe fan going into this latest installment of the series, but I was instantly sucked in by Marins and his performance, without much of the background or undying love that his most rabid fans already had instilled in their psyches. I’m not sure if there will be any more Coffin Joe movies, if only because the man himself is ľ of a century old, but I’m also fully confident that he could pull off at least two more of them if he wanted to.

After languishing in US release limbo for nearly three years, Synapse Films has finally granted Embodiment of Evil the home video release it deserves, and on Blu-ray, no less (a standard DVD release is also available). They offer a top-notch video presentation that, despite the low-budget nature of the production, utilizes a new transfer (the film has already been released in numerous international markets) that sports the excellent detail and image clarity that has become a staple of Synapse. The lossless DTS-MA mix is even more impressive than the video, liberally utilizing all of the channels to produce an enveloping experience that is much better than expected. There are a couple of solid extras on board as well, but the stellar audio and video presentations make this a must-buy for Coffin Joe and cult film fans alike.