“I’m like the patron saint of random violence.” - Papa B (Joseph Mawle) 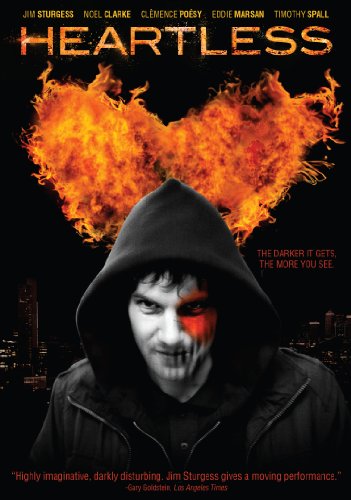 A weird, engaging, criminally underseen import, this is a great vehicle for Jim Sturgess. There are plenty of shocking twists and turns that take this story to some extremely dark places.

Everything Jim Sturgess has been in has left me with at least a slightly empty feeling, wanting so much more from not only the respective film, but more from this young actor as well. Ripe with potential for years, Sturgess has muddled his way through fare like Across the Universe, 21, and The Other Boleyn Girl, for most of his young career. He might have finally found the right cinematic fit for his talents in 2009’s British import, Heartless. Finally hitting a handful of theaters in early 2011, this new flick from director Philip Ridley (The Reflecting Skin) is an odd mix of dark comedy, romance, and all-out supernatural horror film. Fortunately, all of those genres mesh extremely well together, resulting in a beautiful, haunting, beefed-up art house film that finally has a chance at the audience it deserves, courtesy of IFC Films.

Sturgess stars as Jamie Morgan, a shy man in his early twenties whose main focus in life is photography. This is due in large part to a giant birthmark that covers much of his face, causing Jamie to stay as far away from human contact as he can. When his mother is suddenly killed by a group of demon-faced hoodlums, Jamie has had enough and wants to take on anything and everything that looks even remotely like a demon. His tracks are halted by the mysterious Papa B (Joseph Mawle), who offers Jamie a deal that could only have taken root from the devil himself. This deal seems great at first, as, soon after, Jamie meets the lovely Tia (Clemence Posey), and the two become lovers. It isn’t long before Jamie realizes that the perks of his deal are way too good to be true, and he’s left to find a way to defeat any and all forces of darkness that now shadow his every move.

Anyone who comes into Heartless expecting a straight-up genre thriller (an easy misconception, given the marketing and poster) will get much more than they bargained for. Instead, this is, essentially, a thinking-person’s journey into hell, or at least that’s one interpretation. One of the film’s strength is its ambiguity throughout. It’s even easy to argue that the ambiguity is, well, ambiguous, as it’s often a large chunk of minutes after a particular scene where we realize that what we witnessed is possibly much more straight-forward than we realized at the time. Plus, the plot appears to be muddled at times, but the way everything comes together is both satisfying and incredibly moving, helped in large part by Jim Sturgess’ amazing, career-making performance. He’s finally busted out of the shell that he’s been trapped in for far too long, exhibiting acting chops that could eventually become unrivaled. It’s pretty incredible what picking the right script can do for a young actor, and Heartless could just be the big boost that Sturgess needed.

It would be crime not to mention a fantastic cameo by the always great, Eddie Marsan. He shows up briefly in the role of “Weapons Man,” and, while at first this seems like simply a passing, throw-away role, it turns out that this 10-minute sequence is absolutely essential to the director’s overall vision. Of course, it helps a great deal that Marsan seems to be having an absolute ball playing this guy, and he steals each and every second from this scene that he shares directly with Sturgess. Sure, the film is great in many different ways, but I’m not sure it would have been as memorable had it not been for the great work by Eddie Marsan.

It’s hard to believe that Philip Ridley hasn’t made a film since 1995’s The Passion of Darkly Noon, but here’s hoping he doesn’t take a similar hiatus after the masterful craftsmanship he’s shown here. Ridley creates the perfect mood for each and every scene, utilizing amazing, atmospheric cinematography to essentially transport his audience to this strange, hellish world. Fortunately, Ridley doesn’t keep things safe, or even attempt to tailor the film to the masses. Instead, he stays true to his warped, engrossing vision and gives us one of the freshest genre pictures in recent years. This is also a film to know very little about before seeing it, as Ridley allows each, distinct plot point to unfold like a page in a book; a book that you’ll want to go back and reread over and over again. IFC Films presents Heartless in a surprisingly great DVD package. While the audio and video presentations are great in their own right, it’s the large extras package that is truly excellent, and, most importantly, provides a great deal of insight into the making of this extremely complex and thoroughly entertaining film.